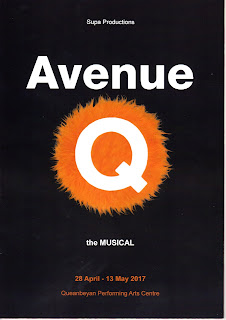 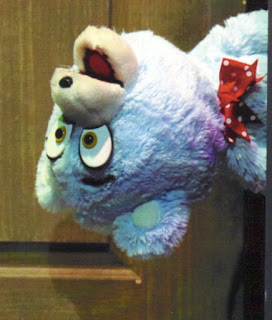 Photos by Craig and Stephanie Burgess.

For people who like comparisons, I previously reviewed the Supa production of Avenue Q of September 30, 2011 (on this blog and at www.frankmckone2.blogspot.com ).  I began “Isn’t it great? Isn’t it fun?”, and now I’ll say it again.  Supa is as Super does.

In fact, I think this year’s show may be even better than before.  Here’s John Griffiths’ photo from 2011 and a rehearsal photo from this year’s program: 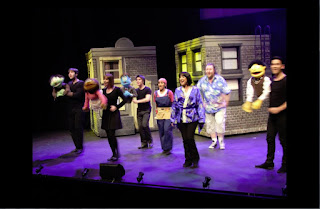 What’s the difference?  No worries about the two casts and their obvious enthusiasm.  It’s the set design that’s different.

In 2011 I wrote, “The set designer Jeremy Bailey-Smith doesn’t get a special mention in the program, but he should for a clever arrangement of movable units which kept our interest at each set change, all smoothly done.”

In 2017, Chris Zuber and Nick Valois get their proper credits, and so they should.  Instead of movable units, which – even when clever – can slow down the action as scenes change often in this musical, they have opted for the concept of a simple street – as in the reference to the original Sesame Street.  So Avenue Q is low status with all the rented units terraced except for a partly visible utility back alley, with a garbage bin for Nicky to sleep behind when he becomes homeless.

The Empire State Building pokes it head up over the top of the roofline, for Kate Monster to wait for Princeton and drop his penny when he fails to show up.  Moving downstage a little takes the characters into an upmarket streetscape without any need to make this plain in the set – ready for the penny to drop on Lucy T. Slut.

This design is much more efficient and more imaginative than movable units and keeps the musical moving along at a cracking pace, yet also allowing more time for mood pieces.  Props can come and go as needed, such as Princeton’s boxes as he moves in, or the bed for the Kate Monster / Princeton sex scene without the need for large scale set shifting.

The one addition which provided a context for this otherwise insignificant street was the electronic billboard above everything, even higher, I think, than the top of the Empire State Building.  That definitely came up Trumps at the appropriate political moment, between the spurious ads.  Just like using Google.

So I think this time around the satire is strengthened, adding a sharper edge to the fun.  Making this critical view of America even greater again.

And I suspect that this year’s characterisation seemed sharper, too, because the timing is more concentrated when performing in this set.  I honestly could not pick out anyone beyond their colleagues, nor pick on anyone.  So I’ve put the rest of the rehearsal photos in, which look well up to the mark of what I saw on opening night.

And, finally, the band was excellent, too.