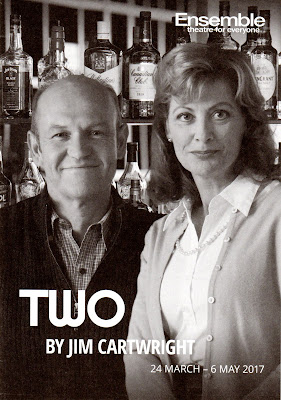 I expected the acting – characterisation, movement, voice – to be excellent, and indeed it was so.  Each actor has to produce a series of unrelated characters, and as well – in the through-line roles of the pub landlord and landlady – they had to make invisible figures they spoke to from behind the bar come alive in our imaginations.  The set, lighting, sound and perhaps especially the costumes provided all the right clues and cues to help the actors in making hard work look easy.

In other words, production values and Kilmurry’s attention to detail made for a successful performance of a script about which I had some other expectations.

When I read that Jim Cartwright’s Two was set in an English pub and that the two actors had to create all these customers as well as the landlord and landlady, I had several expectations.

One was to wonder if these characters would be up to the standard of Alan Bennett’s series of Talking Heads, which had long seemed to me to be the epitome of specifically English characters in monologue form.  I expected Cartwright’s might be, considering the awards and publicity his work has been given.  Or might not be, in the context of a 90 minute play rather than in short stand-alone pieces.

I also had an expectation that the play would be very specifically English, considering Jim Cartwright’s status as an English playwright – perhaps parallel to David Williamson in Australia – and The Ensemble’s publicity saying “you’ll meet all the regulars, a misfit crowd of eccentric and hilarious individuals”.

Without being too premeditated about it, I also expected a 90 minute play (perhaps thinking of Joanne Murray-Smith’s Ninety which I had previously reviewed at The Ensemble on March 9, 2010) to have a tight structure dramatically.  How would this work in the pub setting?

So the playwriting left some of my hopes disappointed, though some of my expectations were met.

It was Kilmurry’s decision to write in the program: The action takes place in a pub in regional New South Wales, 1989.  Apart from my knowing that the author was English, I felt while I was watching that these characters, and the way the landlord and lady talked to people over the bar, was just not like any pub in regional NSW that I had been to.  Even characters' referring to ‘landlord’ and ‘landlady’ was not what you would expect in Australia.  Only later did I find that the play was originally awarded  the Manchester Evening News Theatre Award for Best New Play, in 1989.  Reflecting on the production, and the sterling efforts of the actors to make the script work so well, setting the play in Manchester 1989 should have been the way to go.  Then the language and the types of ‘regulars’ and ‘misfits’ would have belonged to the culture within which they were written: a Northern England city.

Then, the structure of the play seemed to me to affect our generally well educated North Shore Sydney audience rather differently than I remember from Murray-Smith’s example.  First, the theatre was not full.  Second the applause – even after good responses during the show to individual characters – was a little muted at the end.  Clearly the actors deserved recognition for the quality of their work, so I thought more about the script for an answer.

The problem is two-fold (appropriately, I suppose?)  The only continuing thread in the drama is about the relationship between the landlord and landlady.  We have no idea why there is so much bitterness between them (which is certainly not comedy) while we are distracted into watching a wide range of customers, some of whom are comedic, while others such as Mr and Mrs Iger represent a deeply upsetting example of family violence (in a terrific performance by both actors).  We are distracted further by the fact that some of these characters, including at times the landlord, speak to us in the audience directly as if we are present as customers as well.  At other times, we are apparently not present, but watching through the conventional fourth wall.

We are in the fourth wall state in the final scenes, where a customer called Frank has left his child outside and seems to have forgotten to take him home.  The child comes into the pub desperately looking for his father.  This experience brings out the story of recriminations about the death of the landlord and landlady’s seven year-old son, seven years previously, which is the cause of their bitterness behind the bar.  In one short scene, they come to an understanding and re-establish their love for each other.

There is no comedy here, and not a little sentimentality – in the program (and other references online) the play is described as ‘By turns funny, heart-warming and poignant’.  I think, however, the script expects us to believe too suddenly in their love without clues on the way through to allow us to accept this ending.

At the risk of being accused of 18C discrimination, I see David Williamson’s Australian script for Odd Man Out (in Kilmurry’s production at The Ensemble, reviewed here on February 9, 2017) as far better than Jim Cartwright’s English Two.