CANBERRA YOUTH ORCHESTRA WITH THE IDEA OF NORTH

There was a party atmosphere at the Llewellyn Hall for the Canberra Youth Orchestra concert on Saturday night.  The celebratory mood was appropriate as the orchestra is celebrating its 50th anniversary this year.  Helping them celebrate was the singing group, The Idea Of North, whose relaxed presentation style added much to the atmosphere.

The orchestra commenced with Leonard Bernstein’s, ‘Overture to Candide’, a rousing, boisterous work that started life in a failed Broadway musical and went on to become a popular concert hall performance piece.  The orchestra gave a strong and enjoyable performance of this colourful work. 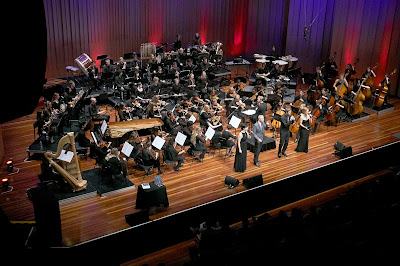 Also, in the first half of the program, the orchestra played another work by Leonard Bernstein, ‘Symphonic Dances From West Side Story’.  A challenging work for any orchestra to play, the Canberra Youth Orchestra captured the spirit of the piece quite well with only a few minor bumps along the way. 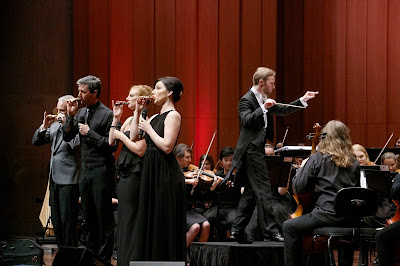 It was an inspired idea to include the a cappella vocal group, The Idea Of North, in the program with accompaniment by the orchestra.  The group presented beautiful jazz arrangements of several tunes from American musicals and movies and worked seamlessly with the orchestra. 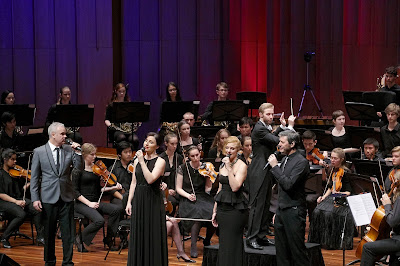 The highlights were ‘If I Were A Bell’ by Frank Loesser from the musical, ‘Guys And Dolls’, a dreamy version of ‘Secret Love’ from the movie, ‘Calamity Jane’, with superb solo work by Naomi Crellin, and Sondheim’s, ‘Send in The Clowns’ in an exquisite arrangement by Graeme Lyall.  The group and the orchestra excelled themselves with Duke Ellington’s, ‘It Don’t Mean A Thing’ in a fantastic and joyous arrangement by Naomi Crellin and Leonard Weiss.

This was a delightful evening of good music and a perfect mix of singers and orchestra.