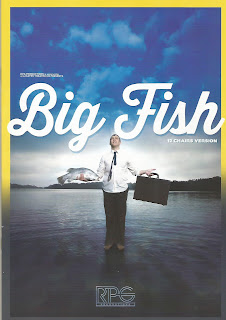 Presented by RPG Productions in association with Hayes Theatre Company.
Hayes Theatre Sydney until 14th May 2017.

A director’s worst nightmare! Your leading man loses his voice on opening night, so what do you do ?  You provide the voice yourself of course! And when the director is the silver-voiced, Tyran Parke, it’s the perfect solution. On this opening night it worked a treat, turning potential disaster into triumph, and providing the first night audience with one of those gold-plated, “I was there the night …….” experiences.


Despite being deprived of his singing voice, but with Parke singing for him sidestage, Phillip Lowe, was still able to provide a thoroughly engaging central performance as the often-absent father, Edward Bloom, who regales his adoring son with fantastical stories of his exploits with witches, mermaids, giants and unlikely heroics, to explain his absences. As the son grows older, he becomes frustrated by his father’s refusal, or inability, to separate the real world from the fantasy. What the son discovers, as he delves further into his father’s life, provides the impetus for this thoroughly captivating little musical, for which Parke has drawn pitch-perfect performances from his entire cast.

Among them, Katrina Retallick, in another of her memorable creations as the perfect loving wife, Sandra Bloom, whose sunny disposition masks a hidden sadness? Her comedic gifts given full reign in the cleverly choreographed trio, “Little Lamb from Alabama”, then heart-breaking in the superbly staged “I Don’t Need a Roof”.

Sam Wood, who alternates with Brendan Godwin, in the role of Young Will, charmingly captured Young Will’s growing frustration with his father’s evasiveness. Adam Rennie brought a handsome presence and splendid voice to the role of the adult, Will Bloom, whose marriage to Josephine, charmingly portrayed by Alessandra Merlo, becomes the catalyst for a confrontation with his father. His performance of the big ballad “Stranger” was truly thrilling.

Kirby Burgess, as the mysterious Jenny Hill, managed to invest the character with an intriguing other-worldliness, while Brendan Lovett in a series of cameos, Brittanie Shipway as The Witch, and Seth Drury as Karl the Giant, each provided stand-out performances among the hardworking ensemble.

Parke’s clever use of shadows, simple, well-executed illusions, imaginative costuming and inventive choreography combined to transport his production into a seductive world of whimsy and fantasy transcending the confines of the tiny Hayes Theatre, and magically in tune with Andrew Lippa’s glorious score, which was splendidly sung and played under the musical direction of Luke Byrne.

PS. If Phillip Lowe sings as well with his own voice as he did on opening night with Parke’s, then a second visit to this production is definitely warranted.