The Rasputin Affair by Kate Mulvany.  Ensemble Theatre, Sydney.  April 1 – 30, 2017.
Originally commissioned by the Melbourne Theatre Company; developed with the support of Playwriting Australia at the National Script Workshop, 2016.

The ultimate farce.  There’s no other way to describe both Kate Mulvany’s remarkable play, and indeed the original history.  ‘Although this play is based on true people and events, some events and characters in this play have been fictionalised and should not be construed as truth’, we are fairly warned in the program.

Yet this is the most truthful view of the farce of the very politics we see played out on our myriad screens every day – a century after the frantic assassination of the mystic (or charlatan) Grigori Yefimovich Rasputin in December 1916 by Tsarist nobles, fearing the mounting Bolshevik revolution which began in earnest in February 1917.

A proper farce has to be funny, of course.  This is where the designers and director come in, matching the wit of Mulvany’s script with a presentation style in the best tradition of fantastical characterisation, surprises galore, extremities in action and voice, not to mention costume – and an especially wonderful set design which fulfilled the requirement of all farce: at least a dozen unpredictable ways of entering and exiting.  All in close-up in the small-scale Ensemble almost-in-the-round theatre, and therefore even more funny than it might have been in a large proscenium space.

Yet behold the truth.  We could not believe the costume, make-up and hairstyling for Sean O’Shea, but here’s a picture of the real Rasputin you can find via Wikipedia, where you can read details of the Rasputin-Tsar Nicholas II-Romanov family story. 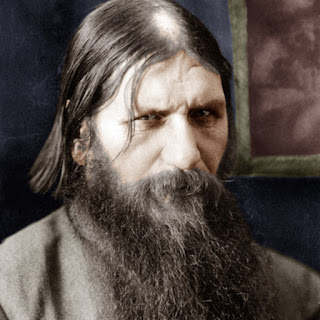 You would not believe that O’Shea could look (and act) so exactly like the real thing.

If you are not familar with the history, you certainly don’t need to be before seeing the play.  Mulvany amazingly tells it all in her two hours’ traffic upon the stage (including 20 minute interval).  And it’s all neatly packaged between two readings of Rasputin’s equivalent of Pauline Hanson’s ‘if you are seeing this, you know I am dead’ video.

That cues us in to the farcical truth – that we are being led by the noses, from Pauline Hanson's One Nation to the President of the most powerful nation on earth, by people living out their personal eccentric unpredictable and very often dangerous delusions of grandeur.

As the well-known cartoon tells us: Stop laughing – this is serious!

I feel I can't pass up the opportunity to quote Penelope Upward, Letters to the Editor, The Canberra Times:  "Once Russia had a mad monk called Rasputin wielding his wicked ways.  Now they just have Putin without the Raz."

How could I have missed it?  Thanks, Penelope!