The set design, costume and make-up, lighting and sound design are the best reasons for seeing Shake & Stir’s Dracula.  The atmosphere of dread is literally terrifically well done.

Bram Stoker’s story is dreadful, probably the most misogynist piece of writing imaginable.  It’s presented by Shake & Stir as ‘Gothic’ literature, accompanied by a 38 page Teacher’s Resource Kit for Year 10-12 students, which in a way justifies the effort because the attraction for young people of this psychologically twisted genre has been an important part of popular culture, especially since the Punk movement of the 1970s found black to be the new black, decorated with chains, safety pins and other items perforating new areas of skin.

Despite the excellent quality of the acting, especially the movement work, in the generally more adult audience last night it was not possible to contain laughter at certain moments, despite the powerful horror effects.  One that comes to mind was when Dr Van Helsing announced that Lucy’s head must be cut off, as well as having the wooden stake hammered through her heart to make sure she is no longer ‘undead’.

From that point and through the long story of Dracula capturing Mina and the three men chasing Dracula back to Transylvania, disinfecting dozens of boxes of Dracula’s ‘earth’ in the last minutes of daylight, the dramatic tension dissipated, until the final fight to kill Dracula with Christian symbolic crosses and suddenly acquired very large kitchen knives.  I thought that was not a good look, considering recent press stories of domestic killings.

I have been highly supportive of Shake & Stir’s previous productions of works like George Orwell’s Animal Farm and 1984, but I really feel unsure about the value of giving Bram Stoker an equivalent imprimatur.  I think a century of so-called Gothic (he died in 1912) is enough.  Or maybe the problem is that he remains undead, and needs a wooden stake through the heart.  I’ll provide the hammer. 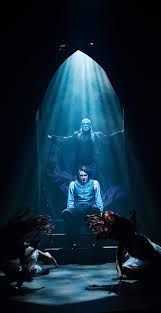 Posted by Canberra Critics Circle at 9:37 AM