Trelawny of the Wells - Canberra Rep 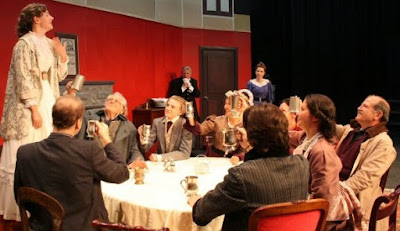 Pinero's "Trelawny of the Wells" is that very British school of play, the one that deals with the possibility and impossibility of moving between social classes.

On the sound advice of her mother to quit acting if she finds an appropriate swain, she agrees to marry the young lord and adopt a new lifestyle as a genteel lady.  When the play opens her theatrical friends have put together a farewell feast, a last supper before her life becomes secure but much less interesting.

The play has an extraordinary lightness of touch, even sentimentality, that feels like a modern romantic comedy: if it was a film, it would fit on the DVD shelf very comfortably next to Notting Hill and Love Actually.  A more morbid or cynical playwright could have found tragedy in Trelawny's scramble to change herself, but Pinero is determined for there to be a happy ending, and will bless his characters with outrageous good fortune to bring that about.

Pinero is also interested in the transition between the melodramatic theatre of the 1860s to the more realistic style of theatre represented by Ibsen, with aspiring playwright Tom Wrench (Robert de Fries) his mouthpiece on this topic, articulating Pinero's own ideas about what theatre should be.

The massive cast is adroitly handled by director Tony Turner, with each character in crowded scenes such as the opening luncheon aware of their purpose, but without pulling focus.  Turner also employs freeze-frame tableaus to focus on particular conversations that might be lost in the chaos of activity on stage.  The size of the cast made the confidence of the characterisations even more impressive.

The play is a kind of intersection of Dickens and Wilde, with the theatre folk bold and lusty while the aristocrats potter in absurd circles of their own making.  Kron as Rose struck the right note of belonging to two worlds, and showed how she changed over the course of the play, while Strand was very likeable as her innocent but sincere lover.  The huge ensemble was consistently believable, whether Rob DeFries undeplaying Tom Wrench's romantic subplot, Jess Waterhouse's dynamic performance as Avonia Bunn, or Nikki Lyn Hunter's grand but amusing turn as the imperious Mrs. Telfer.

Jerry Hearn as Sir William Gower represented the play's attitude to the upper class, presenting the demanding and imperious lord first as an outrageous caricature but ultimately softening him, with his highlight a very arch scene where he rhapsodises on the acting of the legendary but bombastic star Edmund Kean.

As preoccupied with actors and their issues as it is, it is a surprise that this play is not performed more often, especially since its delicate, affectionate humour still resonates.  This is very much a play for actors, but fortunately one the audience can enjoy as well, with the romantic, social, and sometimes financial problems of the characters having universal appeal.

The only real flaw this production has is that the script is garrulous.  While it has already been substantially trimmed by Turner, some scenes drag too long, for example a toast sequence where the joke of the toast's length outstays its welcome.  Worst of all in the climax, where the play rehearsal scene makes its point but then just marches on, draining the play of tension at the point where we should be most excited.

Nonetheless Rep's production of "Trelawny of the Wells" is delightful, a vivid character-driven comedy that coaxes you into its sympathetic world, and when the inevitably happy ending comes you will cheer for the two lovers locked in a stage kiss that feels as long as the toasts made to celebrate their union.
Posted by Canberra Critics Circle at 7:27 PM