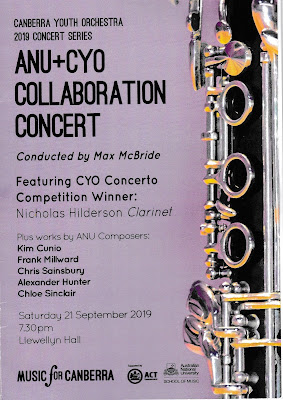 If you like variety in your classical music, this was your dream concert.

In addition, there was also a performance by this year’s CYO Concerto Competition winner, Nicholas Hilderson, on clarinet.  Also performing were 4 members of Wild Voices Music Theatre and soprano, Katrina Wiseman.

Bringing it all together was returning conductor, Max McBride, who conducted the CYO for 17 years from 1992 to 2008.

The CYO concerto competition had 14 competitors this year from around Canberra and regional New South Wales.  The winner, clarinet player Nicholas Hilderson, opened the concert with a performance of the Clarinet Concerto No. 2 by Carl Maria von Weber with the orchestra.  This demanding work was a fine showcase for Hilderson, who played with skill and accuracy.  He was particularly impressive with his emotive playing of the second ‘Romanza’ movement.


The concerto was followed by five works by ANU composers.  Each work was quite distinctive.  Taking its cue from the Scottish Gaelic word for ‘weaving’, ‘Figheadairreachd’ by Alexander Hunter was a colourful and atmospheric work that was well-played by the orchestra.

‘Autonomy’ by Chloe Sinclair, was an edgy work that was nicely unpredictable in its direction.  At times melodic, lush and with repetitive rhythms, it was well-played by the orchestra.  Kim Cunio’s ’21 Mantras for Tara’ was a beautiful, soaring work that had its origins in the harmonic chanting of Tibetan monks.  Max McBride played double bass to represent the low-key chanting of the monks as well as conducting the orchestra.  Katrina Wiseman gave a hauntingly beautiful performance of the soprano part of this work.

The concert concluded with a spirited performance by the orchestra of Richard Wagner’s demanding overture from his opera, ‘Die Meistersinger von Nürnberg’.