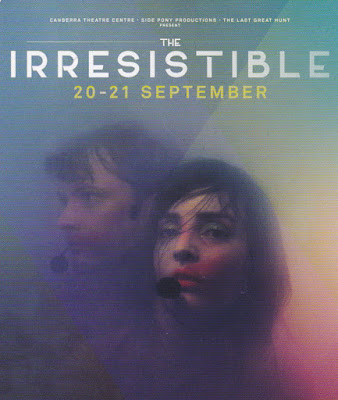 The Irresistible.  Side Pony Productions and The Last Great Hunt at Canberra Theatre Centre, The Playhouse, September 20-21, 2019.

On overnight reflection on my initial response – that The Irresistible is the most boring theatre work I have seen for a long time – I think I have worked out at least what was the intention.  It’s a new kind of theatre which I dub Metaphoric Obscurantism.

Even the cast and creatives are hidden, since we were not presented with a program, until you search online.  Here they are at https://www.artsontour.com.au/tours/irresistible/

The metaphor seems to be that a young couple (perhaps married, but at least in a relationship) are represented as the pilot (male) and co-pilot (female) of a plane which crashes.  The backstory seems to be about the woman, when aged about 12, having been left by her sister Bridget to walk home alone through a park where she was followed by a man.  Though apparently nothing actually happened, the woman was (justifiably) frightened.

How this was connected to a more immediate story about going to an airport to pick up a child (who may have been Bridget’s daughter, though I was never sure of this) seemed to be that the woman’s intention to care for the child became the source of raging conflict with her husband – who at one point raves at her in the foulest of language for several minutes.  I took this to be an example of at least verbal abuse of women.  Perhaps the plane crashing was meant to be a symbol of the violence and failure of men to understand women’s needs – as sisters and carers.  Her insistent concerns seemed to prevent him, during interminable bouts of rage, from getting on with the job of piloting.

Whether we were meant to blame him or her for the crash, I couldn’t work out.

The production was obscure often to the point of incomprehension, especially because the two actors (behind a plastic screen) were using microphones which often (deliberately) distorted their voices.  Either of them at any one point could sound like the woman, the man, Bridget or the young child, in between announcements by either of them as pilots to their passengers.  Were we meant to be the passengers on this ill-fated plane?  Perhaps.  (I have to disclosure my generation gap here.  Picking up and understanding distorted high frequency sound is difficult through hearing aids.)

I began to wonder if the actors were miming to a pre-recorded sound track.  Their performances were amazingly detailed in physical movement, but entirely cold in terms of emotional response with us.  For me, theatre is about living communication between the actors, through their characters, with us in the audience.

Watching this show was alienating in its normal meaning during the performance; at best, as my overnight reflection suggests, I could see it as a more modern form of expressionism with the intention to create distancing effect (Brechtian Verfremdungseffekt).

But where Brecht’s plays engaged us in progressive understanding while we watch an unfolding story, The Irresistible is just a plane crash.  Resistible, in my case.