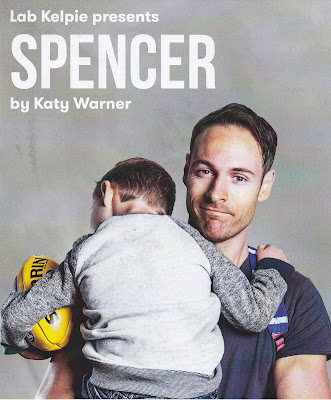 The play is an excruciating embarrassing success.  But you certainly could not call the extended family, into which the two-year-old Spencer is about to be welcomed, an embarrassment of riches.  If you were to draw up a family tree for Marilyn, Ian and their sons Ben and Scott, and their daughter Jules, it might look rather farcical.

Yet author Katy Warner keeps us very cleverly right on the edge, balanced between farce and comedy.  Then, almost against our expectations, the story of the young up-and-coming footballer who couldn’t remember or even recognise which was the girl, among many, who has become the mother of his son – that story becomes sad, and has something significant to say about our society.

For a nation-wide tour to lots of smaller performing spaces, the designers have put together an amazingly effective set centred on the family lounge room; even down to the banging-shut screen door out in the hallway.  With the props, including things that pop-up among welcome decorations that make a huge mess, I wonder what size truck they have to fold it all into.

The casting and the resulting performances were spot-on.  Lyall Brooks as Ben, the elder son who has never grown up, is quite extraordinary.  The manic unloveable sexist larrikin kids’ football coach is a character ripe for over-playing.  Brooks makes Ben almost believable.

Fiona Harris plays the eldest, Julia – always “Jules” in this drinking swearing family on the outer edge of Melbourne suburbs – with a dignity.  She has a sense of how her life could have gone if she had been able to work in fashion design; yet knows she is somehow held back.  I felt some hope by the end that she will find a way out.

Ian, the father who left when the uncomprehending children were small, is played by Roger Oakley with a subtle kind of knowingness while pretending naïvety.  He captures perfectly the frustrating nature of this man from the point of view of young women like Marilyn, when he married her, and the one who has just left him, taking his children with her to Queensland (2000 kilometres away).  So, says Ben, she couldn’t even stay in the same state!

To Jane Clifton as Marilyn and Jamieson Caldwell as her youngest son Scott get my special accolades for character development.

Caldwell shows us Scott apparently in relaxed mode as Ben chivvies him in the opening scene; but bit by bit we cotton on, as his sister does, that he is hiding depression and guilt for the way he had treated Spencer’s mother.  As we come to understand him, the farcical nature of his surrounding family takes on new meaning.  His past behaviour towards women raises our attention to all those news reports of sports athletes in court; and his sense of guilt and pride in wanting to have his unexpected son welcomed, and his decision to drop a promising professional career in football, offers hope for positive change.

Clifton gives us an absolutely realistic Marilyn: the mother doing her very best to keep everything going from the days when when she certainly did not hate Ian (Julia asked her about that); through separation and another man, now also departed, to be her children’s Dad; while keeping faith always for Scott’s success.

Her swearing, drinking and smoking may cause us to laugh – until Jane Clifton turns the table on us with Marilyn’s speech saying sorry to her children.  The words may have been written by Katy Warner, but it is Jane Clifton who makes us understand.

Spencer, then, is not laugh-out-loud comedy: quite remarkably it is laugh-along-with comedy because it is full of the typically Australian chiacking – the teasing put-down intra-family way of keeping up not only the appearance of continuing fun, but even the reality of love.  And in the great Australian cartoon tradition, we keep laughing while we quote from Stan Cross: “For gorsake stop laughing: this is serious!”

LAB KELPIE – An Australian New Writing Theatre Company is a “not-for-profit organisation with a board of experienced and passionate industry professionals [who] are strong advocates of new writing and aim to support Australian playwrights by developing, presenting, touring and publishing their work…”