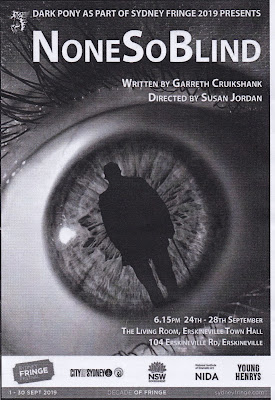 
NoneSoBlind is an illuminating short play showing the difference between genuine gay relationships and manipulative pedophilia.

It raises difficult questions.  Is Mr Shepherd strictly speaking a pedophile (as defined in Wikipedia “Pedophilia is a psychiatric disorder in which an adult or older adolescent experiences a primary or exclusive sexual attraction to prepubescent children”) because he claims his behaviour is an uncontrollable obsession?

But, because his focus is on teenage boys who, he claims, are sixteen and willing to be paid, should we see him as Jude ultimately does as a fraud who uses young gay men purely for his own gratification?

In the small confines of The Living Room, with the limited audience sitting almost in the acting space, the playing out of Jude’s middle class attempts to do the right thing by this old blind man demanding help, while working out his relationship with working-class Scott, and by chance observing Mr Shepherd in a sexual encounter with a teenager, the play is confronting.  When violence ensues, barely two metres from my seat, it is quite simply shocking.

When the story was revealed, by Jude’s insistent questioning, about how Mr Shepherd was blinded by his gay partner; and then when Scott reveals his abuse as a child by ‘friends of the family’ – and explains how he recognises that he is manipulating Jude to sustain his love – the complexity of Garreth Cruikshank’s writing becomes apparent.

Martin Portus successfully plays Mr Shepherd’s demands and sly manoeuvres, using his old age and blindness, against the truth that he is psychologically disturbed and did grow up in the past when homosexuality was a crime, and had to be hidden and kept secretive.

Though he abuses others, he is also the victim of abuse – by social attitudes and the law, and by the attack in which he, an art teacher and sculptor, being blinded, lost his one opportunity to achieve positive recognition.  As he points out, many famous artists, like Michelangelo,  and philosophers, like Sophocles, were homosexuals like him.  I thought of Joe Orton murdered by Kenneth Halliwell, in their Islington flat in 1967.

Capturing this complexity and our changing feelings for and against Mr Shepherd was a major achievement for Martin Portus.  And, though his was the role central to the issues in the play, the quality of his acting was thoroughly backed by Russell Cronin as Jude, who plays our representative in this drama.  He asks all the questions of both Mr Shepherd and his partner Scott in their developing relationship that we are asking ourselves.  Thomas Burt in that role shows us how modern understanding is changing, while Scott’s backstory shows us how much further there is to go.   Both younger generation actors, in their intense emotional reactions, make us understand their feelings – and wonder how we would go in their circumstances.

Being in the Fringe Festival means only small-scale financial support, not including funds to pay everyone or even pay for rehearsal space.  Set, props, lights and sound equipment are minimal.  Yet the directing and design worked very well in creating the three areas needed: in the street outside Mr Shepherd’s flat, inside his kitchen, and along the street to Scott’s dining table.

So to conclude, I saw NoneSoBlind as a successful production of an important play, which needs now to be taken further afield.  Perhaps Dark Pony, a very new outfit headed by Susan Jordan, can work in cooperation with Creative Partnerships Australia (see my commentary on this blog 15 May 2019) to build support, perhaps for touring this production and for developing a continuing program.