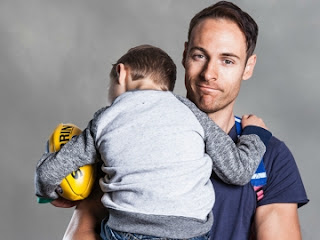 Katy Warner’s Spencer is a revelation into our souls, our spirits, our lives and our families. Maybe we are not as characteristically bogun or working class as the family in her play Spencer. Her family echoes another era, conjoined with the family issues that can confront a modern family. I knew the working class matriarch, Marilyn (Jane Clifton), the boisterous, rough-hewn bogun adult son, Ben (Lylall Brooks), the between jobs daughter Jules (Fiona Harris) and the top grade footy playing sensitive son Scott (Jameison Caldwell) nd then there’s the remarried no-hoper father Ian (Roger Oakley)  WE meet this disparate, dysfunctional family on the occasion of Scott’s young son Spencer’s first visit to meet the rest of the family. There is excitement in the air, a nervous anticipation and a desperate desire to make the child welcome.  If only everything could go smoothly.
But this is not a voyage upon still waters. Marilyn’s sons still live at home. Sister Jules moves back to save money and ex-husband Ian’s wife has left him, so he brings his une man tent back to the house he left eighteen years earlier and pitches it in the loungeroom.

Director Sharon Davis makes the most of the mayhem and potential disasters that come thick and fast as different personalities collide. Old sores fester, old habits brittle, past and present arguments erupt and shockwave tremors expose a family’s frailties and vulnerabilities. But Warner’s play is much more than a battleground of past regrets and present resentments. Bogun Ben is a big kid. Scott exhibits a sensitivity that harbours a troubled vulnerability. Jules, who, to Marilyn’s disappointment has not produced her first grandchild, demonstrates a  neglected creative artistic talent and Marilyn keeps a firm hold on a household of adult children, whom she has raised to be decent, likeable human beings, if at times lost and bewildered. Like the hotch-potch diddy drawer of kitchen oddities, this is a family of behavioural and personal oddities, that Spencer’s imminent arrival tips out of the kitchen drawer of their lives.

Davis’s direction for HIT Productions is staged with imaginative and often hilarious elan. Arguments melt into familial familiarity and sibling rivalry is soothed by tender affection . There is even a fragile acceptance of their Dad’s weaknesses. Designers Rob Sowinski and  Bryan Cullen’s setting and lighting and sound  hark back to an era that I remember only too well. It is the setting of simple functional design. There is no artifice, no opulence. Family photos hang on the wall. A reproduction acknowledges the value of a work of art in the house and the sofa has seen much better days.
What stifles any risk of cliché or predictable stereotype is a company of outstanding performers, directed with a keen eye for character and action. Lab Kelpie, an Australian new writing company, presents a work that is rivetingly real. The characters breathe the lives of many in their predicament, the single parent, the out of work child, the struggling parent, the promising talent that may never be realized, sibling conflict, loyalty and love, the no-hoper father and the consequences of one’s actions. Warner’s Spencer is ostensibly simple and yet the complexities within the actions and attitudes of her family members are complex and often convoluted.

Lab Kelpie's Spencer is a funny, moving, entertaining and brilliantly acted insight into all our lives. Warner’s simple revelation of one family in the suburbs of Melbourne reveals a universal aspect on human nature. Here is real life amplified to embrace the power of theatre to illuminate and comment on the human condition. The Q Theatre is to be congratulated on including this excellent example of new Australian playwrighting in its 2019 Season.
Posted by Canberra Critics Circle at 4:34 PM