THE WOMAN IN THE WINDOW 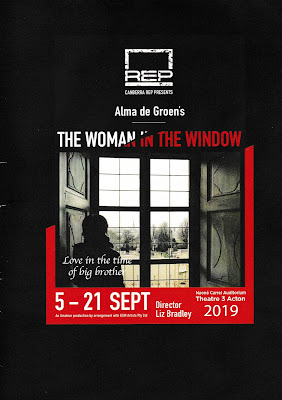 Considered by some to be Alma de Groen’s masterpiece, ‘The Woman In the Window’ is a clever and absorbing 1998 play that has been given a fine production at Canberra REP.

Set in both Leningrad, Russia, in the 1950s and an imaginary dystopian Australia of the future, the play focusses on two women in very different worlds who struggle against authoritarian regimes.  The Russian poet, Anna Akhmatova, is now forbidden to write by the Communists and her spirited resistance costs her dearly.  In a future Australian society, Rachel Sekerov lives in a world devoid of art and humanity.  Her dangerous search for fulfilment mirrors Anna’s experience in Russia.

Liz Bradley, the director, has achieved fine performances from her cast.  As the poet, Anna Akhmatova, Karen Vickery gives a performance of great depth, inhabiting her character completely.  As Rachel, the vulnerable girl in the future, Zoe Swan displays her character’s struggle and the search for meaning in her life in a very fine performance.  Lainie Hart is excellent as the fiercely loyal companion to Anna Akhmatova.  Performances by everyone else in the cast are richly detailed and effective.

The accents of the Russian characters were believable and clearly understood.  There was a lot of detail to be absorbed about these two very different worlds and characters and the deliberate pace set by the director was just right.

The two worlds were clearly depicted on a clever, composite setting designed by Michael Sparks.  Anna Senior’s 1950s unglamorous costumes for the Russian characters were very well designed and the costumes of the future were simple and believable.  The complex lighting plot by Chris Ellyard and sound design by Neville Pye added a great deal of atmosphere to the production.

While we are looking at worlds of the past and the future, this play sounds a warning for us here in the present.  When you think about it - as you will while watching the play - you’ll realize we’re not so very far away from the worlds that are depicted.

Liz Bradley’s production of Alma de Groen’s ‘The Woman In The Window’ is quietly unsettling, funny at times and thoroughly entertaining.  It’s a winner in every aspect.

Len Power’s reviews are also broadcast on the Artsound FM 92.7 ‘In the Foyer’ program on Mondays and Wednesdays at 3.30pm.
Posted by Canberra Critics Circle at 9:51 AM