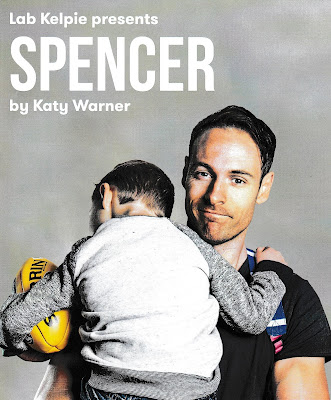 In ‘Spencer’, two grownup children, Ben and Jules, have returned to the family home after relationship breakups.  Still at home is Scott, a talented young footballer, and their long-suffering mother, Marilyn, whose husband left her many years ago.  Ben, an ex-footballer, is loud and uncouth and needs to grow up.  His sister, Jules, while dealing with her own problems, finds herself in the referee role between the brothers and their mum much of the time.

A troubled Scott is nervously preparing for a visit by a woman he can’t remember who appears to have had his baby, Spencer, two years ago.  Everyone is tripping over each other in this crowded household as the time for this visit approaches.  Matters get worse when their long-estranged father, Ian, also turns up and Scott has another revelation for the family to deal with as well.

There are good performances by the cast in this show.  They embrace their characters whole-heartedly and with considerable depth.  Jane Clifton as the mother, Marilyn, is particularly impressive displaying a harsh exterior that masks the love for her family in spite of their faults.  Lyall Brooks gives a well-rounded and courageously repellant performance as the boofy son, Ben, and Jamieson Caldwell plays his character, Scott, with a fine sensitivity that is very appealing.  Fiona Harris is very real as the flawed sister with an inner strength and Roger Oakley is amusing as the weak and ineffectual father, Ian.

The show has been directed by Sharon Davis at a furious pace with a strong focus on depth of character.  The cast play the often overlapping dialogue with great realism.

Lab Kelpie is a not-for-profit Australian new writing theatre company dedicated to the production of new work by Australian playwrights.  Katy Warner, the playwright of ‘Spencer’ shows great promise as a writer, particularly with the development of recognizable characters in her play.  There is a tendency to overwrite which slows the action down a bit and, while the swearing might be realistic, hearing the same word constantly just gets very wearing after a while.  Scott’s other revelation comes a bit late in the play and seems almost superfluous.

How you respond to ‘Spencer’ will depend a lot on your own family experience in Australia.  For some people this play will be an accurate and enjoyable depiction of recognizable characters but for others it could prove to be an uncomfortable step back into the past.

Posted by Canberra Critics Circle at 9:09 AM