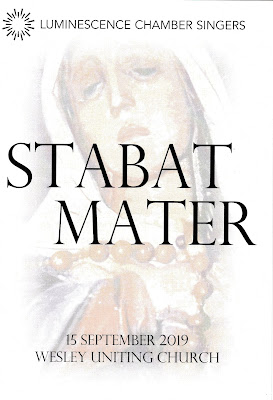 An opportunity to see and hear Pergolesi’s ‘Stabat Mater’ performed live is not to be missed.  This performance with the Luminescence Children’s Choir and soloists Chloe Lankshear and Stephanie Dillon, accompanied by string quartet, deservedly attracted a large audience at the Wesley Uniting Church in Forrest.

Composed in 1736 by Giovanni Pergolesi, the score is set to a medieval text which describes the Virgin Mary witnessing the suffering of her son, Jesus, on the cross.  It’s one of Pergolesi’s most celebrated works.

Even without its religious connotations, the extreme suffering of a mother on the death of a child is an emotion we can all understand.  Pergolesi’s beautiful music is heart-breaking from start to finish.

The Luminescence Children’s Choir were impressive with their clear and accurate singing.  They sang four out of the twelve parts of the score from memory, which was quite a feat with a Latin text and demanding part singing.  It was also admirable to see them able to stand quietly and very still for lengthy periods while the soloists were singing.

Chloe Lankshear, soprano, and Stephanie Dillon, mezzo soprano, sang their parts with great technical skill and feeling.  Their solos were beautifully sung with a believable level of emotion.  When they performed the duets, the blending of their voices was sublime.

The string quartet of Madeleine Retter and Helena Popovic, violins, Katrina Vasala, viola, and Evelyn Andrew, cello, played the music score very well.  These are seasoned performers on the Canberra music scene, often appearing with the Canberra Sinfonia, National Capital Orchestra and others.

Artistic director of Luminescence and conductor of this concert, AJ America, brought together all the elements of this emotive work skilfully.  It was a memorable experience to see and hear this work performed so well.


This review was first published in the Canberra City News digital edition of 16 September 2019.


Len Power’s reviews are also broadcast on the Artsound FM 92.7 ‘In the Foyer’ program on Mondays and Wednesdays at 3.30pm.

Posted by Canberra Critics Circle at 8:23 AM