ONCE UPON A TIME IN HOLLYWOOD 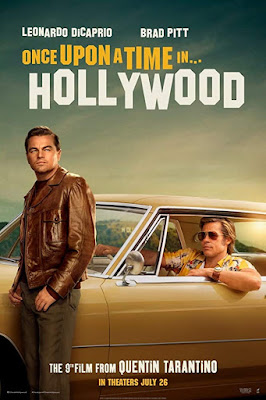 It’s the start of another California day where careers are made, lost, or peter away under a peerless blue sky. The instant we hop into the back seat of a Cadillac and head down Cielo Drive, most of us have already given ourselves over for the ride. The vehicle careens wildly as it negotiates the traffic, but what the heck. Leonardo DiCaprio and Brad Pitt are in the front seat, and soul is on the soundtrack, so who’s asking questions?

Although Rick Dalton (DiCaprio) lives in a rambling bungalow with pool where posters of his success on screen plaster the walls, he needs work. Work that can resuscitate a career that has been waning since his star turn in ‘Bounty Law’, a TV western. In 1969 the movie world was turning, a new breed of auteur directors and anti-hero stars were stealing the march on the studio establishment.

Like harbingers of a different future, Sharon Tate (Margot Robbie) and Roman Polanski (Rafal Zawierucha), are living next door to Rick on Cielo Drive. By then Polanski had already had significant success with Rosemary’s Baby and Repulsion, while his wife Tate, an actor of talent, would surely scramble free of the bimbo roles the industry was insisting she was meant for.

At the bar where Dalton washes up with his stunt double and minder, Cliff Booth (Pitt, ‘too pretty to be a stuntman’), movie producer Marvin Schwarz (Al Pacino) advises him to answer the call and find himself a role in the ‘spaghetti western’ industry in southern Europe.

Although Dalton is loosely based on some minor identity, many of us know that Clint Eastwood rocketed from  TV's Rawhide to international success in Sergio Leone’s glorious tributes to the western, including Once Upon a Time in the West. Leone is also a director who, understanding the value of a great soundtrack, allowed the Ennio Morricone score the space to do its thing.

Once Upon a Time in Hollywood has given Tarantino an opportunity he's been waiting for to play selections from his vinyl collection – but only up to 1969. The soundtrack is rich and evocative, including the sweet, sad strains of Jose Feliciano’s California Dreamin’, a signpost for the emerging counterculture.

Tarantino re-imagines Hollywood like an insider, though he was just six at the time

Tarantino has researched and re-imagined Hollywood here with the affection and knowledge of an insider, waiting for the big break and hanging out with mates like Rick and Cliff.  Hollywood in 69 wasn’t Tarantino's lived experience, however much he would like it to have been. He was just a six-year-old in LA at the time.


Once Upon a Time is told from the fringe, from the point of view of those who missed out. Dalton and Booth aren’t alone here. The real Charles Manson (a small role occupied by Australian actor Damon Herriman) was on the fringe too, an aspiring singer-songwriter, and one of the many who never struck it lucky. The brief scene in which the cult leader is looking for a record producer who used to live at the Polanski address, has a factual basis.

This filmmaker makes such exciting cinema, lavish, playful, and so gloriously cinematic that it seems mean to quibble, but he can’t resist that flash of R-rated, ultra-violence, that extravagant, spectacularly savage gesture that features in nearly every film, catching you off guard. It’s not for nothing that films are called Tarantino-esque. Jackie Brown in 1997 was a noble exception.

It is interesting to hear one of the Manson girls (Dakota Fanning) say that the TV/film industry had made her commit murder. It is sometimes said that, besides non-linear plotting, satiric black humour and playful intertextuality, the films of Quentin Tarantino ushered in new levels of graphic and stylized violence in the 1990s, delivered as casually as a burger takeaway.

And yet, Tarantino has found a very clever way of referencing the incredible violence of the Tate murders. Obliquely, using the lead up to the horror as a subtext to his story of knockabout lead characters. What’s disturbing though, is how the Manson acolytes themselves are dealt with, at least as savagely as the real-life murder victims themselves.

The mood of laid-back California cool that suffuses the film vanishes in the penultimate moment. And although the happy coda does its best, it can’t blot out what has already been seared into the retina.

Jane's reviews are published at her blog, the Film Critics Circle of Australia (from time to time), and are heard on ArtSound FM 92.7 MHz (when she is in Canberra)
Posted by Canberra Critics Circle at 2:20 PM