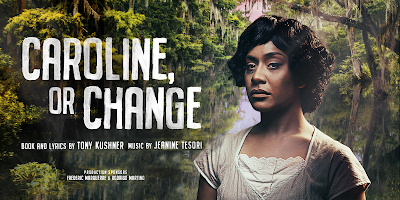 ‘Caroline, or Change’ is a musical with book and lyrics by Tony Kushner and a score by Jeanine Tesori that combines spirituals, blues, Motown, classical music, and Jewish klezmer and folk music.  It played on Broadway in 2004 and also had a production by the National Theatre in London in 2006 where it won the Olivier Award for Best Musical.

Set in Lake Charles, Louisiana in 1963, the musical focusses on Caroline, a black maid in the home of the Jewish Gellman family.  Spending most of her day in the basement doing laundry, Caroline resists involvement with the well-meaning family who employs her and clashes with her daughter and a friend over the civil rights movement that is gathering strength around her.  However, as the Moon sings to her, ‘Change come fast and change come slow but change come’.

This is a highly emotional experience that has been sensitively directed by Mitchell Butel with a strong cast of performers.  Inhabiting the huge leading role of Caroline so completely, Elenoa Rokobaro gives a powerful singing and acting performance that is intensely moving.  Amy Hack gives a nicely layered performance as Rose Stopnick-Gellman, the woman who employs Caroline and can’t understand why Caroline won’t respond to her offer of friendship.

At the performance I attended, the demanding role of the young boy, Noah Gellman, was played and sung very well by Daniel Harris.  This child role is alternated at other performances with Ryan Yeates.  Nkechi Anele gave a strong and heart-felt performance as Caroline’s increasingly militant daughter, Emmie, and there were finely drawn, effective performances by Tony Llewellyn-Jones, Genevieve Lemon, Andrew Cutliffe, Elijah Williams, Emily Havea, Alexandra Fricot and Ruva.

The story takes place in various rooms in a three storey house as well as Caroline’s own home.  This presented a design challenge for the small Hayes Theatre stage that has been met superbly and with great atmosphere by set designer, Simon Greer, Alexander Berlage’s lighting design and Anthony Lorenz’s sound design.

The musical direction by Canberra’s Lucy Bermingham is excellent with the 5 piece orchestra playing the atmospheric score very well.

This is a fine musical set in a fascinating time and locale with a lot to say generally about life and how people respond to change.  The great music, singing and in depth performances in this production make it a memorable experience.

Len Power’s reviews are also broadcast on the Artsound FM 92.7 ‘In the Foyer’ program on Mondays and Wednesdays at 3.30pm.
Posted by Canberra Critics Circle at 10:17 AM