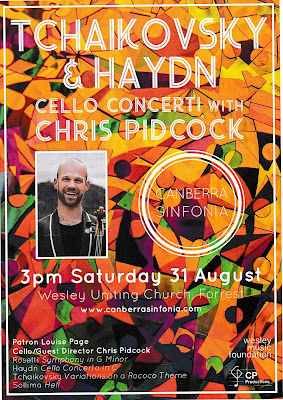 Canberra Sinfonia’s latest concert gave us four very interesting works.  Three of them required a cello soloist and the fourth work, a symphony, was by the composer, Antonio Rosetti, who is apparently not often programmed in modern concerts.

Canberra cellist, Chris Pidcock, not only played the featured cello parts but also directed the orchestra as well – not an easy feat when as a cello soloist you need to be seated and facing the audience when playing.

The first work presented, Haydn’s popular Cello Concerto No. 1 in C major, was played with great energy and clarity by both orchestra and soloist.  Pidcock is a very physical player, unselfconsciously showing the effect the music has on him as he plays.  That feeling easily transfers to us in the audience, adding another pleasant dimension to the concert.  By a happy chance, the sunlight through the church window was a perfectly placed spotlight on the performer.


The second work, by Antonio Rosetti, was a revelation.  A prolific early Classical era composer, this was my first experience of his work.  The second movement had a strangely abrupt ending but it was a colourful and dynamic work overall and was played very well by the orchestra.  It left me wanting to hear more of this composer’s music.

Tchaikovsky’s Variations on a Rococo Theme was the first work played after interval.  Based on an original theme in Rococo style, Tchaikovsky wrote it with the help of Wilhelm Fitzenhagen, a German cellist and fellow-professor of the Moscow Conservatory.  Fitzenhagen then made changes to the order and some content to best highlight the soloist.  The result is a lush, melodic work that was played with sensitivity by Pidcock and the orchestra.

The final work presented, ‘Sollima Hell 1 from Songs From the Divine Comedy’, was by contemporary Italian composer and cellist, Giovanni Sollima.  This quietly dramatic work was startling in its emotional content as well as being wistfully beautiful.  It was played superbly by Pidcock and the orchestra, bringing this fine concert to a satisfying close.

As well as playing solo cello so well, Chris Pidcock did a fine job as guest director of the orchestra.

Posted by Canberra Critics Circle at 11:08 AM