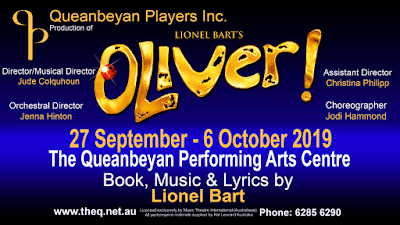 Oliver. Book, songs and lyrics by Lionel Bart. Based on the novel Oliver Twist by Charles Dickens,

Musicals have changed since Oliver was all the rage in school productions,  staged unmiked in draughty country and city school halls. Nostalgia and sweet sentiment swept over me as I watched Queanbeyan Players’ superb revival of Lionel Barts’s classic musical adaptation of Charles Dickens’s Oliver Twist.

In the comfort of the Q Theatre and in a cleverly staged, miked version of Oliver, Barts’s musical explodes with life, vitality and talent in a joyous celebration of Dickens’s dark and desperate tale of Victorian England and Barts’s  catchy, contagious and evocative songs and lyrics. Older members of the audience may remember the tale of young Oliver (Willum Hollier-Smith), sent to the Workhouse, sold to an undertaker, only to escape and end up in the clutches of pickpocket master, Fagin (Anthony Swadling) and his tribe of pickpockets, under the tutelage of the Artful Dodger (Joss Kent). They will recall the ominous presence of the notoriously brutal and evil Bill Sikes (Michael Jordan) and the sad fate of his sweetheart Nancy (Emily Pogson), when she attempts to rescue Oliver from Fagin’s clutches.

A lesser production might be tempted to play this period piece for melodrama, inviting an audience to hiss the villain Sikes, sigh with the heroine Nancy and cheer the hero Mr Brownlow ( David Leigh). Director and co-musical director, Jude Colquhoun has avoided melodrama for authenticity. Janetta McRae and her team have paid careful attention to costuming the period and Jodi Hammond’s choreography captures the simple dance steps of the time, ideally suited to the company of players. The production exudes the spirit of Victorian England as well as its gloomy poverty, social misery  and class distinction. Dickens provides Oliver Twist with a happy ending, but we are constantly conscious of the pit of poverty and social disadvantage.

Colquhoun’s musical direction with Jenna Hinton and a 15 strong orchestra swept me away with the majestic orchestration of the opening workshouse number Food Glorious Food. The young cast of children dance, sing and act with such gusto and veracity that Queanbeyan Platers’ production asserts such promise and professionalism from the very outset. As Workhouse Kids and Fagin’s Gang, the young performers set the bar high for principals and chorus alike. And to the man, woman and child they rise to the mark with a splendid performance of Barts’s evergreen classic.

There is not a single number in this show that doesn’t have the feet tapping, the hands clapping, the laughter ringing or the tears streaming. Emily Pogson’s heart rending performance of As Long As He Needs Me sends goosebumps down the spine. The company’s Oom-Pah- Pah led by Nancy and Bet (Alyssa Anderson) is a rollicking pub song in The Three Cripples. The heart reaches out to Willum Hollier-Smith’s soulful rendition of Where is Love and it is difficult to hold onto a hard heart  as Anthony Swadling deliberates I Am Reviewing The Situation.

There is not a performance or a performer that does not impress with talent, dedication and enthusiastic commitment to every moment of this excellent production. It is not possible to mention all by name, but every scene, every song, every dramatic moment held the packed matinee house in the palm of its hand. Not even a short evacuation after a fire alarm could interrupt the production’s impact. Unfortunately, I could not say the same about the crinkling of potato crisp packets!

Most impressive of all is Queanbeyan Players’ ability to gather such an outstanding cast together and lift them to such a very high standard of performance, aided by imaginative direction, outstanding orchestration and musical direction. At the risk of singling out a particular performer, I do want to state how incredibly fortunate Queanbeyan Players’ is to discover young Hollier-Smith to play the role of Oliver. If he chooses, he holds the promise of a very bright future. As for this outstanding , joyous and absorbing production, all that is left to say is “Please Queanbeyan Players, can I have some more!”