Maxine Peake – direct from the premiere London production, as Woman

In Avalanche, a “Woman” has everything come crashing down upon her.  Her “childlings” never become more than silent images of her desperate hope.

“Woman”, who speaks directly to us, does not give herself a name, because, as I see it, she represents the fact that all women must face reality in a way that men never have to.

This woman, in our modern society, leaves aside having a child as she moves in and out of her relationship with “Paul” from the age of 19 (he is 23) while she establishes herself as an independent professional.  She becomes a successful writer and film maker, but at the age of 37 and finally entering a rocky marriage with Paul, discovers that he has had an irreversible vasectomy.

IVF becomes the only option.

Can she produce viable eggs?  What are the chances that Paul can provide viable sperm?  What about donors, of sperm or eggs?  If frozen, to provide extra sperm or eggs – are they as good as fresh?

It’s not long before Paul goes his own way – again, as he has always done.  Surgery to reverse his vasectomy fails.  He already has children from other women.  He doesn’t need her.  But now she must go on, against the odds and at great expense.

Maxine Peake drags us into her story almost unwillingly, yet we are fascinated as she is by the chance of succeeding.  I found myself thinking of those ‘problem’ gamblers playing poker machines, even when they know the machines are designed to win against them.  Woman plays the IVF game for a horrifying eight rounds, until at the age of 45 the chance of success is down to 2% at best.  She quotes some of the costs on the way – later my wife and I calculate probably around $100,000.

At this point the whole set, representing the bare pale walls of uninviting clinics, suddenly, literally comes crashing down around her.  It’s a frightening experience even for us watching from the safety of comfortable seats.

Yet the play is not a tragedy: more a recognition of reality.  As women have always had to, “Woman” faces up to disappointment, finding she can love her sister’s new baby and extend her love beyond herself.

In the end, Avalanche, with its detailed descriptions of what IVF entails, becomes a source of continuing thinking and discussion about the practicalities of our evolution.  Are we better off for having invented artificial insemination, or should we simply accept that nature is not romantic or sentimental?  In fact, would the Earth and us living on it be the better if we had not tried to selfishly improve everything?

Maxine Peake’s performance, with a little help from her childling friends, is a tour de force, with frightening real and philosophical implications. 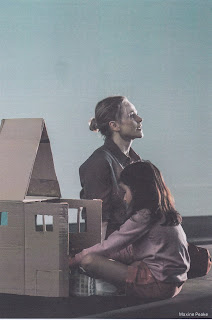