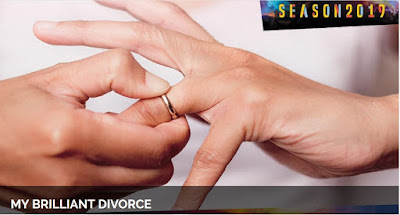 I left the theatre in two minds about this presentation of My Brilliant Divorce.  Though there were laughs at points throughout the show, we were not fully engaged in feeling empathy with Angela at any time.  I think this was reflected in the somewhat muted applause at curtain call.

Mandi Lodge deserves praise, as we might expect from such an experienced actor, for a highly crafted performance, showing her skills for fine detail in presenting Angela’s changing moods, as well as in her abilities in mime and voice as Angela acts out other characters in her story – of divorce from ‘Maximus’ (aka Mervyn) and new love in Dr Steadman.

Perhaps it was the style of the presentation, using pre-recorded voices of, for example, Angela’s mother and the grotty Welsh Adventure tour operator, as well as the illustrative slideshow (as a window on the world behind the action set in Angela’s loungeroom) that took our attention away from how we might have felt for Angela’s dilemma.  Should she sign the divorce agreement papers, or keep up hope that her ‘roundhead’ philandering husband might return – and that she may be able to love him again?

The style turned even more to simple laughter when her dog rolled on stage on wheels – and the skateboard-like trolley wheeled itself off as Angela cuddled her toy pet.

On the other hand, considering the content of the story and the scriptwriting, perhaps making an obviously staged presentation might be the only way to make the play work.  It might be difficult to play Angela in a straightforward naturalistic way, since she seems to speak directly to us, sometimes seeking to make us laugh, or to shock us with some detail of men’s and women’s sexual parts; and sometimes seeking our sympathy.  The structure of the story is too clearly designed by the author for us to accept Angela as an entirely believable character.

Imagine, though, if Judith Lucy, one of our more acerbic standup comedians, took on this role: alone on a bare stage, with just a microphone.  She would surely have the self-awareness to see the irony of her inability to free herself for so long from Mervyn’s grip on her love.  There would be an extra dark edge to her phone calls to her Irish Catholic mother.  And would she seriously be happy with the offer of her gynaecologist doctor to go further than he had on the operating table, already knowing “everything about me”?

But would the Irish author Geraldine Aron be happy?  Probably not: her script seems to ask for no more than a light approach, based on what seem to me to be fairly old-fashioned jokes about women and men: this 51-year-old pretends to be 39 going on 38; she sees men (or she herself?) as only concerned about the size of their penises.  1950s jokes seem a little out of place in a play published in 2003.

So for me Angela’s divorce was not as brilliant as it might have been if the author had written a character of much greater depth, and of a more modern kind.  Then the questions, and Angela’s answers, that arise for us all about love and divorce could be both much funnier and more telling.

But for you, and certainly for quite a few people in the audience at The Q last night, HIT’s production of My Brilliant Divorce could be an enjoyable hour and a half to have with a glass of bubbly.