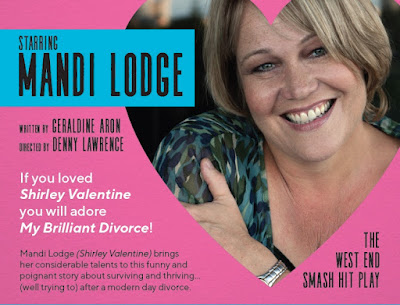 Divorce is not exactly a barrel of laughs for those going through it, but it’s interesting how many plays and movies there have been about that subject.  It works because behind the jokes and funny situations lies a very human drama that many of us have experienced for ourselves.  Irish dramatist Geraldine Aron’s one-woman play, ‘My Brilliant Divorce’, has been described as a ‘funny stand up tragedy’.

Middle-aged Angela is struggling to come to terms with the process of divorcing a husband who has left her for a younger woman.  At times hopeful that he will return and also angry both at him and life in general, she takes the audience into her confidence, sharing details of the journey she must take through this difficult time in her life.

A big hit for its star, Dawn French, in London in 2003, Mandi Lodge plays Angela in this touring production.  Previously seen here in the similar play by Willy Russell, ‘Shirley Valentine’, the role fits the actress like a glove.  She’s very good at playing warm and funny with an endearing down-to-earth style that holds the audience’s attention throughout the 90 minute running time without interval.

Denny Lawrence has directed the show with pace and lots of business for the actress to help maintain interest throughout.  The set design and well-chosen video projections add an attractive dimension to the show.

Divorce affects nearly all of us in some way or another – either directly or indirectly.  The level at which you can identify and empathise with the character’s story in this play will depend on your own experience.  For many this play will mirror their own story of an uncomfortable time in their lives.  There’s a funny side to everything if we look hard enough and there are plenty of laughs to be had in this enjoyable play.

Posted by Canberra Critics Circle at 9:35 AM