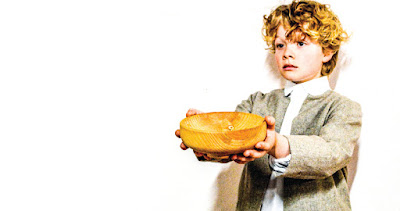 Lionel Bart’s ‘Oliver!’ has been a phenomenal success internationally ever since it first opened on stage in London in 1960.  The popular film version in 1968 won the Academy Award for Best Picture.

Based on the 19th century novel, ‘Oliver Twist’ by Charles Dickens, the musical follows the story of an innocent child, Oliver, who was born in a work house for the poor in England and, after escaping to London, is taken in by the Jew, Fagin, and his gang of young thieves.  Oliver’s ultimate escape from this life of squalor involves murder and mayhem but all ends happily for the boy.

The strength of Queanbeyan Players’ production is in the fine singing and dancing by the large cast of the well-known songs, ‘Consider Yourself’, ‘Oom-Pah-Pah’, ‘Who Will Buy?’ and ‘You’ve Got To Pick A Pocket Or Two’.  The large orchestra, conducted by Jen Hinton, plays the score very well and sound balance between singers and orchestra is fine.

Costumes by Janetta McRae are nicely in period and the choreography by Jodi Hammond illustrates the intention of the songs very well and is scaled to the right level for her dancers’ abilities.  The enthusiasm in the performances by the large ensemble makes these songs very entertaining.

With atmospheric character names like Sowerberry, Widow Corney, Mr Bumble and Dr Grimwig, there is a great opportunity for detailed character work by the actors.  Many of the performers in this production delivered performances of little depth.  However, Tina Robinson as the Widow Corney and Chris Bennie as Mr Bumble, the Beadle, gave nicely drawn Dickensian characters with their performances.

Willum Hollier-Smith was a fine Oliver.  His singing of ‘Where Is Love?’ was excellent and his acting was confident and convincing throughout the show.  There was also generally good work by Anthony Swadling as Fagin, Emily Pogson as Nancy, Joss Kent as the Artful Dodger and Michael Jordan as Bill Sikes.

The set, designed by the director and consisting of moveable screens, was practical given the number of scene changes required, but lacked atmosphere.  There was no sense of the period in London at all.

‘Oliver!’ is always an entertaining show.  Audiences will have a good time with this, especially the big musical numbers.  With stronger characterizations and a more interesting set design, it could have been even better.

Len Power’s reviews are also broadcast on the Artsound FM 92.7 ‘In the Foyer’ program on Mondays and Wednesdays at 3.30pm.
Posted by Canberra Critics Circle at 11:16 AM