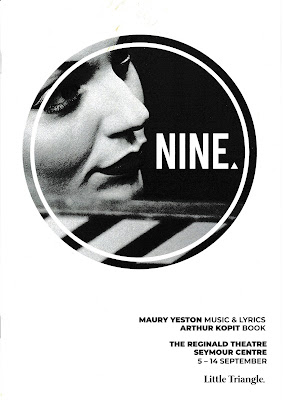 The musical, ‘Nine’, is most likely known to people only from its disappointing movie version that starred Daniel Day Lewis a few years ago.  This is unfortunate because, to see it staged well in a theatre is a totally different experience.  The production by Little Triangle in Sydney demonstrated what an exciting and entertaining musical it is.

Based on Fellini’s 1963 movie, ‘8½’, the musical ‘Nine’ focusses on film director, Guido Contini, who undergoes a mid-life crisis involving the development of his new film and his complex romantic entanglements.  Guido’s misogyny is sorely tested as the women in his life, who once placed him a pedestal as a genius, now reject his objectification of them.  Reality and fantasy collide as Guido’s crisis deepens.

This production cleverly used the bare bones of the Seymour Centre’s Reginald Theatre to create a film studio setting for the action of the show.  Using only chairs and a white cross marked in the centre of the stage, the director, Alexander Andrews, kept the show moving swiftly and clearly through the multitude of scenes with the focus strongly on each of the characters.

Seventeen women surround Guido, the man, and Little Guido, the boy, in this show.  Everyone in the cast impressed with the depth of their characterisations and the quality of their singing and acting.  Andy Leonard gave a terrific performance in the huge role of Guido.  It was quite an achievement to play the misogyny so fearlessly and still make Guido a charismatic character we felt concern for.

Established in 2017, Little Triangle’s stated aim is “to present underperformed theatrical productions that challenge audiences and performers alike at a low price point - in the hopes to expand, educate and diversify the music theatre audience.”  In the program it states that “the professional theatre-makers on this production are working unwaged’.  This production was an excellent showcase for their work.

The high standard of this production makes Little Triangle a company to keep an eye on and support, especially if they continue to focus on quality musicals that are rarely performed.

Posted by Canberra Critics Circle at 10:19 AM