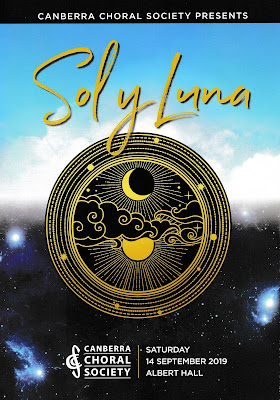 The sun was shining through the large windows of a packed Albert Hall and, with the promise of spring in the air, Canberra Choral Society’s Spring concert, ‘Sol y Luna’, was timed just right.

Music director and conductor, Dan Walker, had assembled a wide-ranging program of works that reflected humanity’s deep connection with sun, the moon and the stars.  Ranging across almost 1000 years, the program contained some well-known works as well as some that were less familiar.

The first bracket of songs celebrated the powerful and life-giving sun, commencing with ‘O Nobilissima Viriditas’ which is attributed to the 11th century Benedictine abbess, Hildegard of Bingen.  This arrangement had the women in the choir singing the chant and their fine singing was pleasantly uplifting.

All three other works in this group were very well sung.  Lili Boulanger’s ‘Hymn to the Sun’ was the standout - dramatic and powerful and sung clearly and accurately by the choir.

The second bracket featured works related to the stars and the moon as well as the seasons and the romance and atmosphere of evenings.  Australia’s Alice Chance was featured with her composition, ‘Fiat Lux’, a work of great beauty that showcased the fine blend of the choir’s sopranos and altos.


This was followed by two charming 19th century works by Fanny Hensel that focussed on the impact of the sun, moon and stars on nature.  The bracket finished with an outstanding and sensitive performance of Joseph Rheinberger’s ‘Abendlied’.

The second half of the program presented works by later composers commencing with a hauntingly beautiful work by Dan Walker himself, ‘Were All the Stars To Disappear And Die’, which was set to a text drawn from W.H. Auden’s ‘The More Loving One’.

New Zealander, David Childs, was represented with a finely atmospheric performance by the choir of ‘The Moon Is Distant From the Sea’.  The program concluded with a memorable performance of ‘Lux Aeterna’ by Edward Elgar.

Anthony Smith was the accompanist for the choir on piano and, between the brackets of choral works, he also gave beautiful performances of two solos of works by Chopin – Barcarolle Op. 60 and Berceuse Op. 57.

This excellent concert finished with a delightfully unexpected and well-sung ‘Rocket Man’ by Elton John as an encore.  Jane Russell-Jones provided a fine clarinet accompaniment.

Posted by Canberra Critics Circle at 8:19 AM