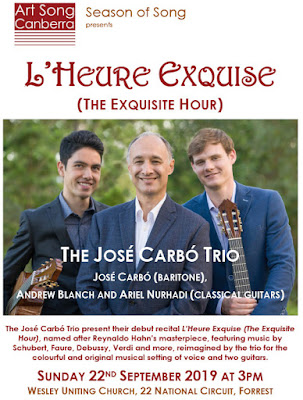 With ‘L’Heure Exquise’, the premier Australian baritone, José Carbó, joined with emerging classical guitarists Andrew Blanch and Ariel Nurhadi to present a wide ranging program of classical works that, for the most part, had never been heard with a guitar accompaniment.  The trio first appeared together at Canberra’s 2015 Voices In The Forest concert.

Helpmann Award-winning baritone, José Carbó, has performed in major opera houses internationally.  He has recently been seen in a new production of ‘Tosca’ for Opera Queensland and in Graeme Murphy’s new production of ‘Madama Butterfly’ at the Sydney Opera House for Opera Australia.

Andrew Blanch is recognised as one of Australia’s leading young classical guitarists.  Since making his solo debut in 2017 at the Sydney Opera House, he has had a busy career performing internationally.  Ariel Nurhadi is a Sydney-based classical guitarist who has performed in concert around Australia.  Both he and Andrew Blanch are graduates of Timothy Kain’s renowned guitar class at the Australian National University.

Their concert featured music by Schubert, Fauré, Debussy, De Falla, Verdi and others.  Carbó’s and the guitarists’ relaxed manner and interaction with the audience gave the concert a welcome intimacy.

Opening with ‘O my sweet ardour’ by Christoph Gluck, José Carbó’s performance was full of romance and longing, perfectly complemented by the beautiful guitar arrangement.  Other works sung superbly by Carbó included a haunting ‘Romance’ by Debussy and ‘The Curious One’ by Schubert with its very moving final verse sung with quiet sensitivity.  Schubert’s nightmarish ‘The Eriking’ was given a well-paced, dramatic delivery and the highlight of the concert was a set of Spanish songs by Manuel de Falla which Carbó performed magnificently.

The two guitarists demonstrated their extraordinary skills with performances of three very different works by Rameau, Gnattali and Piazzolla.  Watching these superb artists playing the most complex passages in these works was breath-taking.

The program finished with José Carbó singing ‘Cortigiani vil razza dannata’ from Verdi’s ‘Rigoletto’.  His powerful voice and acting ability demonstrated why he is one of Australia’s foremost opera singers.  Although normally sung with a full orchestra, the accompaniment arranged by the trio for guitar was fascinating and honoured Verdi’s original work.

Photo by Peter Hislop
Len Power’s reviews are also broadcast on the Artsound FM 92.7 ‘In the Foyer’ program on Mondays and Wednesdays at 3.30pm.
Posted by Canberra Critics Circle at 8:35 AM