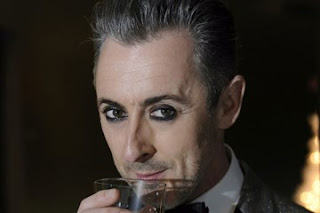 There are some en­­tertainers who will hide themselves behind a character. There are others who inhabit another’s world. And there are those who will bare their all before an audience. Alan Cumming is such a one. His show Alan Cumming Sings Sappy Songs is a tongue in cheek misnomer, smacking of apology. “I’m an actor who sings’’ he tells his inspirational mentor, the legendary Lisa Minelli. He is that and much, much more. He is an actor who feels, whose emotions are laid bare in the anecdotes he spins with mischievous relish and on the notes of his songs of love, life and experience. To be in his company is to live for a while in the magic of his charm and the honesty of his connection. He stands before us, casting off his jacket to reveal the black leather pants, the sleeveless black shirt and the narrow black tie. He is the gay, trim, thin man from the East coast of Scotland, schooled in his craft in Glasgow, his spiritual home. He stands before us, proudly acknowledging Alon Ilsar  on percussion, Eleanor Norton on cello and his musical director on piano , Lance Horne, a vegan who owns a mule. On Cumming’s arm is tattooed Only connect , the words of E.M. Forster in his novel, Howard’s End. It is Cumming’s mantra, and his connection with his musicians is heartfelt and affectionate.

In a programme of songs from Miley Cyrus’s The Climb to Adele’s Someone Like You to Avril Lavigne’s Complicated and songs by Sondheim and Brecht and Weil, Cumming scans the milestones of a life of laughter and tears. He recounts the connection, learned during filming Who Do You Think You Are, with his long dead maternal grandfather, fatally wounded in a game of roulette in Malaysia. He bares his soul with the account of an abusive and distant father, who cruelly disclaimed him. The experience aches in the soul searching words of Rufus Wainwright’s Dinner at 8. The pangs of pain are swiftly relieved by the absurd story of his Trojan Condom story and the breezy TV commercial rendition of the Ecstasy Jingle. Neither he nor his audience is allowed the luxury of indulgence before a quip casts aside the lingering suggestion of sappiness. Cumming is the masterful conjurer, brazen, impish and mercurial, swift to lull us with a song or snap us into laughter with a jest. In one instant he wields a fierce attack with a searing rendition of What Keeps Mankind Alive from Brecht’s The Threepenny Opera. This is followed by a Twitter message from Stephen Siddell with his Robbie Burns’ style damnation of the current US President. After two centuries Scotland’s national poet and provocateur of invective is brought to life with forceful unambiguity in Siddell’s vitriolic assault on Trump to the spontaneous applause of a partisan house.  The show too soon comes towards its close with time to honour Sondheim in a  mishmash of numbers from Sweeney Todd, Into The Woods and Company. All artifice is cast aside in Ladies Who Lunch from Company.  In If Love Were All, Wainwright quotes Noel Coward’s talent to amuse:

I believe the more you love a man
The more you put your trust, the more you're bound to lose
Although, when shadows fall,
I think if only somebody splendid really needed me
Someone affectionate and dear
Cares would be ended if I knew that he wanted to have me near
But I believe that since my life began
The most I've had is just a talent to amuse
Hey ho, if love were all.

As the final number of the show, it could well be Cumming’s signature song. His evening of sappy songs, gently, almost tentatively begun build to a passionate,full-voiced cry for love – the lost love of a man whose name was tattooed on his groin until laser treatment removed it from his life; the love of a grandfather, dead before Cumming’s birth; the loss of love of a father and the love of an actor’s life of connected stories and songs.