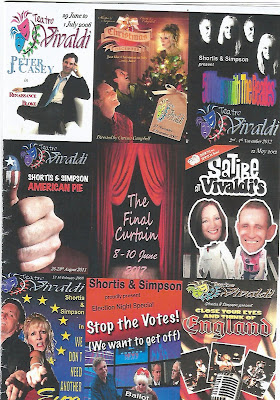 Remarkable how easily it is for something irreplaceable to slip away in the name of progress. That thought was obviously on the minds of the loyal patrons who packed Teatro Vivaldi last night, for the penultimate performance of “The Final Curtain”.

The final performance tonight is booked out, after which Mark Santos and Anthony Hill who have carefully nurtured their elegant venue for the last fourteen years to transform it into one of the most glamorous cabaret venues in Australia, will begin the onerous task of dismantling their dream.

The scarlet walls will be stripped of the dozens of Venetian masks, theatre posters and celebrity photos that have given the venue its unique ambiance, and the furniture and equipment will be packed up in preparation for the painful clearance sale to take place before the wreckers reduce their precious creation to just a cherished memory.

True to form, the irony of the plan by decision makers at the ANU to tear down three iconic performance venues, the ANU Arts Centre, The Gods Café and Bar, and Teatro Vivaldi, to replace them with a health and wellness centre, pavilions for pop-up events and a range of new performance spaces, to encourage more off-campus visitors, was not lost on the three performers privileged with these last performances.

Canberra’s favourite satirists, John Shortis, Moya Simpson and former Artist of the Year, Peter J. Casey, who between them have clocked up 32 shows in Teatro Vivaldi, commenced “The Final Curtain” with a warmly received song they composed for the occasion, “F…k The A.N.U”.

They followed through with more clever special material tracing the history of the venue, before treating the audience to a selection of favourite political songs, hilarious musical send-ups and their special brand of cheeky social commentary, all the while deftly dispensing perfectly judged amounts of sadness and celebration.  Appropriately, they finished the show with another specially composed tribute, “The Final Curtain” which began with the words... “The cabaret is ended”.

After a typical night of great food, great show and great company, it proved a timely and sober reminder of an irreplaceable loss when Teatro Vivaldi closes its doors for the last time tonight.

This review first published in the digital edition of CITY NEWS on 10th June 2017
Posted by Canberra Critics Circle at 11:13 PM