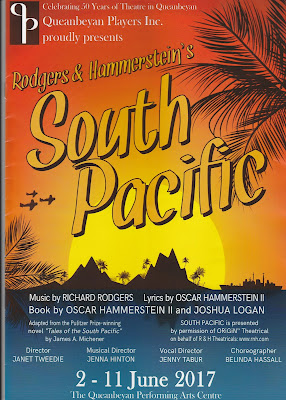 Starting with ‘Oklahoma!’ in 1943, the team of Rodgers and Hammerstein produced several landmark musicals that are still performed regularly around the world to this day.  The secret to their success was their choice of stories with universal themes that still resonate with audiences.  In ‘South Pacific’, which opened in 1949, their target was racism – a controversial issue to tackle at that time.

‘South Pacific’ was based on James A. Michener’s 1947 volume of short stories, ‘Tales Of The South Pacific’.  Set in wartime, the show focusses on the romances of a young mid-western nurse and a middle-aged Frenchman who had been married to a Polynesian woman and had two children with her and a young lieutenant who falls in love with a local Tongan girl.  When things get serious between the couples, racism threatens to tear them apart.

Janet Tweedie’s production for Queanbeyan Players is nicely atmospheric with a good painted backdrop of a Pacific island scene and period settings by Roger Timewell.  Tristan Foon is credited with set design drawings.  The excellent lighting effects by Hamish McConchie add considerably to the atmosphere of the show and the costumes by Janetta McRae are generally fine.

As the nurse, Nellie Forbush, Ellen Scott nicely captures the naivity and freshness of a young woman struggling with aspects of a love affair that take her outside her comfort zone.  She sings the famous songs very effectively and pleasantly, especially ‘I’m In Love With A Wonderful Guy’.

The role of the Frenchman, Emile de Beque, was written for an operatic bass singer and, while Michael Moore gives the songs his best shot, his lighter baritone voice can’t make the songs soar with the weight and emotion that an opera singer can achieve.  In addition, more thought needed to be given to his costumes.  In the white dinner suit, he looked every inch the cultured Frenchman described in one of the songs, but his other costumes looked too modern and sloppily casual.

As Bloody Mary, Tina Robinson gave a fine performance as this island woman, singing ‘Bali Ha’i’ and ‘Happy Talk’ very well.  As Lieutenant Joseph Cable, Anthony Simeonovic sang well but his characterisation was a bit too steely and cold.  He should show more emotion when his feelings have been unlocked by his affair with the young Tongan girl, Liat, played delicately by Jadziah Oakes.

There was good work by supporting cast members, especially Joseph McGrail-Bateup as Captain George Brackett and Andrew Macmillan as Luther Billis.  Singing by the enthusiastic chorus was fine and there was a nice sense of individual characters amongst them. They did, however, struggle with the choreography set for them by Belinda Hassall which seemed too often to be dance for its own sake and added little to the show.

Musical direction by Jenna Hinton was excellent with good sound produced by the orchestra throughout the evening.  Sound levels between singers and orchestra were fine.

On opening night, too many of the cast were slow at picking up cues but hopefully this will improve as the season progresses.  Some scene changes took too long, especially one in the second act where chorus members were brought on in front of the curtain to just mill around and gossip to cover the change.

Overall, Janet Tweedie has produced an entertaining production of this much loved show which has some of the most beautiful songs ever written for musical theatre.