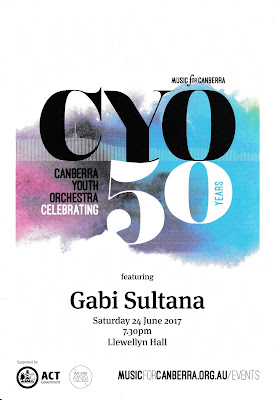 It was a good idea for the Canberra Youth Orchestra to present a major work by Philip Glass and contrast it with another by Gustav Mahler.  The two very different styles and eras of music resulted in a very exciting concert.

The Tirol Concerto for Piano and Orchestra is one of Philip Glass’s later works.  It was premiered by the Stuttgart Chamber Orchestra in about 2000 and was written as part of Glass’s ‘The Concerto Project’.  The Concerto is in the fourth volume of this work and employs many of the minimalist techniques that are synonymous with his composition style.

Joining the orchestra on piano was internationally-renowned Maltese soloist, Gabi Sultana.  Under the baton of Leonard Weiss, both soloist and orchestra presented an accomplished performance of the Philip Glass work that was completely enthralling.  All three movements were well played and the highlight was the melodic second movement where both orchestra and soloist produced a particularly sublime sound.

As a short encore piece, Gabi Sultana played a work by George Crumb that sounded fiendishly difficult to play but was very entertaining.  She got, and deserved, a thunderous ovation at the end.

The orchestra played Mahler’s Symphony No. 1 in D Major for the second half of the concert.  First premiered in 1889, it met with negative reviews at the time due to Mahler’s unusual methods of orchestration.  It’s an exciting work and the Canberra Youth Orchestra gave it a fine performance after a tentative start.  The second and third movements were especially well played.

This was a fine concert of great contrasts with a soloist who gave an exciting performance and an orchestra that more than met the challenges of these fascinating works.