The first thing you notice about Dan Barnett's latest jazz album "Walkin' Shoes", when you press "play", is the truth and authenticity of the sound.  Every instrument and voice is so honest and the balance of soloists with ensemble so nuanced that it's as though they're right there in your listening room playing just to you.  It's so friendly, real and natural, it's like having your very own private live gig.

Barnett and 13 mates make up the big band on the album and they’re joined on some tracks by special guest vocalist Tricia Evy or vibesman Kelly Ottaway.  And when Evy’s not singing, it’s Barnett’s own solid baritone voice that takes to the mic. 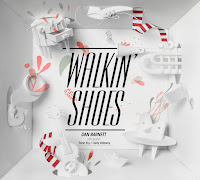 Even though most of the tunes in the set are the work of the usual big names of jazz, like Ellington, Mulligan or Gillespie, nearly all of them are arranged by members of the band, with a special mention of Ottaway, whose name as arranger is next to five of the 12 offerings.  One track, “Good Times Bad Times”, getting an Ottaway arrangement of its own, is written by Barnett, in collab with guitarist Shane Cranney, of Moods Band fame.

In some ways, this album’s name is a misnomer, for the music swings along very nicely indeed, even through the ballads.  One feels the urge to don the dancing shoes, take a partner and swing and sway around the living room floor, right there in front of the band.

Programming is nice, keeping the listener’s attention all the way through with changes in mood, but always moving along with a driving rhythm or a gentle swing.  There’s some nice Latin salsa (“Tin Tin Deo”), sultry singing (Evy in “All Too Soon”, along with some sensual wah-wah muted trom from Barnett), and something of a departure from the big band sound to a lounge sound in “Good Times Bad Times”.  The closing number, “They Can’t Take That Away from Me”, is a very classy duet between the two vocalists with the band swinging along superbly in the back.

Whether it’s a vocalist or a solo instrumentalist, this recording gives them exactly the right balance with the rest of the band, which never dominates the soloists but leaves the listener in no doubt that it’s there.

From beginning to end, Dan Barnett’s “Walkin’ Shoes” is a very enjoyable album, packaged up in a very attractive, non-plastic, cover and with minimal liner notes.  Actually, liner notes really are not needed at all; the first-class music makes the album stand alone.  The listener will be so captivated, they will want to put the cover down and just listen … or dance.
Posted by Canberra Critics Circle at 4:31 PM