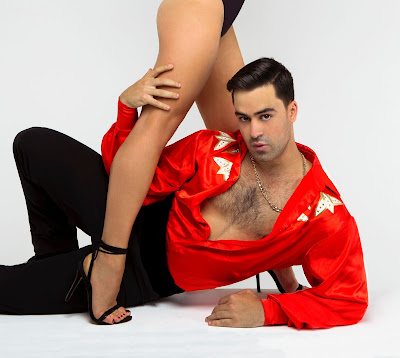 Ryan Gonzalez is a singer, dancer, telenovela star, three-time Eurovision Song Contestant and ex-bestie of Menudo Band-mate, Ricky Martin … or so he would have his audience believe. He’s got the looks, he’s got the voice and he certainly can shake his bootie.  However due to a series of misunderstandings brought about by incompetent management, his planned Adelaide Oval concert has been cancelled in favour of this appearance in the Artspace of the Adelaide Festival Centre.
Gonzalez has a big ego, endless confidence in his own ability, and an apparently insatiable sexual appetite which any number of showbiz celebrities seems happy to help him satisfy… or so he would have his audience believe.

Commencing his show with an energetic performance of  Ricky  Martin’s  “She Bangs”, Gonzalez   confides that as the only son in a Hispanic family in which he has seventeen sisters, his mother  was keen that he should have an exotic name, hence Ryan.  He demonstrates his musical theatre cred by singing the duet from “Phantom of the Opera” “with himself, because his big surprise guest, Christina Aguilera, failed to show up. He also treats his audience to an Australiana medley which ends with “Zanadu”.

For the most part the show is good fun. Gonzalez is a delightful characterisation and his execution of Amy Campbell’s spot-on choreography is impressive. He receives good on-stage support from Conrad Hamill who incorporates a variety of electronic gizmos in his clever accompaniments.

It seems a shame therefore that Richard Carroll’s script, which for the most part is sharp and funny, compromises  the enjoyment of some by pursuing  cheap laughs including several  explicit references to oral  sex , which at this performance  drew audible gasps from the audience , and a particularly tacky audience participation sequence in which Gonzalez sings “Tonight I’m F..cking You” to an embarrassed young woman he has dragged up on stage.  The use of real celebrity names and photographs as Gonzales boasts about his sexual conquests was also highly questionable.