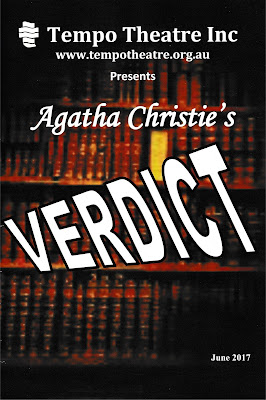 You don’t have to try and guess who the murderer is in Agatha Christie’s ‘Verdict’.  You actually witness the killing onstage but the twists and turns of the plot will leave you gasping with surprise anyway.  First performed in England in 1958, the play is more of a melodrama than a murder mystery.  It wasn’t a success in London’s West End at the time but the play continues to be performed around the world.

Refugees, Professor Karl Hendryk and his invalid wife, Anya, are living at a university in England.  Her cousin and close friend, Lisa Koletzky, has moved in with them to care for Anya and to manage the professor's home.  Lisa has suppressed feelings for the professor and the situation is aggravated by a rich and spoiled young student determined to win the affections of the professor.

Director, Jon Elphick, has produced a fine production of this unusual play of Christie’s.  His strong cast of ten presents well-developed characterizations in a play where the psychology of the individuals is important.

Paul Jackson is especially effective as the Professor, maintaining a credible accent throughout the show as well.  Nikki-Lynne Hunter shines as his invalid wife and Monique Dyson as Lisa gives a moving performance of a woman in love but doing ‘the right thing’.

At the matinee I attended, it was pleasing to see the house was almost full and the audience was obviously having a good time.  This is one of Tempo’s strongest productions and a good opportunity to see one of Agatha Christie’s more unusual plays.

This review was first published in the Canberra City News digital edition on Sunday 4 June.  Len Power’s reviews are also broadcast on Artsound FM 92.7 ‘Artcetera’ program (9am Saturdays) and ‘Dress Circle’ (3.30pm Mondays).
Posted by Canberra Critics Circle at 10:06 AM