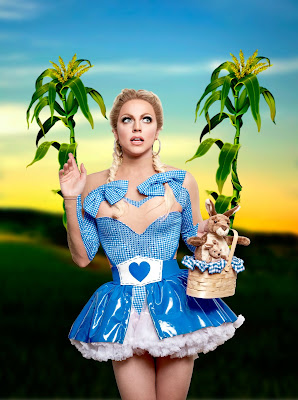 Courtney Act is the creation of clever female-impersonator, Shane Jenek, who attracted attention as the world’ first gender diverse contestant on a reality television talent show competing successfully in “Australian Idol” in 2003.
As Courtney Act, Jenek harkens back to the 1960’s when Carlotta was Queen of the Cross at Les Girls and female impersonators strove to be the most beautiful woman in the room. The difference with Courtney Act however is that she has a fine singing voice, whereas the drag queens of the Les Girls era relied on often-brilliant lip-syncing to recordings of the reigning pop divas of the day especially Shirley Bassey.

Courtney Act’s success on “Australian Idol” led to recording contracts. Capitalising on her success in Australia, she moved to America, where she again achieved television success as runner-up in the 6th season of “RuPaul’s Drag Show”. This led to a string of impressive engagements across the US and Europe.

Returning to Australia with her stylish new show, “The Girl From Oz”, Act pays tribute to her Australian background, cleverly re-interpreting a repertoire of Australia songs in a polished, professional performance which would be the envy of any contemporary pop princess.

Featuring excellent costumes, an intelligent script and inventive musical arrangements superbly played by a trio of top-line musicians led from the piano by Daniel Edmonds, Act   makes her entrance on ruby-red sequinned roller skates singing not “Over the Rainbow” but “Xanadu”. After establishing that the Oz in the title of her show refers to Australia, she doffed the roller skates for glamorous ruby-red sequinned high heels.

Clever versions of Men at Work’s “Down Under”, and  Peter Allen’s  “Arthur’s Theme” preceded a moving arrangement of the Bee Gees “Stayin’ Alive”, which revealed a surprisingly different resonance in the familiar lyrics.

Surprise continued to be the defining ingredient of Act’s performance with unexpected repertoire choices including superbly sung interpretations Natalie Imbruglia’s “Torn”, Air Supply’s “Without You”, Peter Allen’s “Don’t Cry Out Loud” and Sia’s “Diamonds in the Sky”.

Her connecting dialogue was tightly scripted interesting and funny. Several film clips, used to cover costume changes, revealed her more serious side, particularly the excerpts of her work as the Australian correspondent of the Australian news website Junkee.com, capturing her undertaking risky live interviews as she toured the U.S. including one in which she interviews Trump supporters at a Donald Trump rally.

Even her “naughty section” surprised, as she took the stage in a costume featuring thigh-high red boots to belt out terrific versions of Olivia Newton-John’s “Physical”, Chrissie Amphlett’s “I Touch Myself”, and ACDC’s “You Shook Me All Night Long”, before, looking more Kylie than Kylie, rounding out her show with Minogue’s “Can’t Get You Out Of My Head” and “Locomotion”.
Courtney Act is a star on her own terms, with the looks and talent to reach audiences beyond the drag show genre.

“The Girl From Oz” provides her with an excellent vehicle to reach that audience. If you get the opportunity to catch this show, don’t miss it.