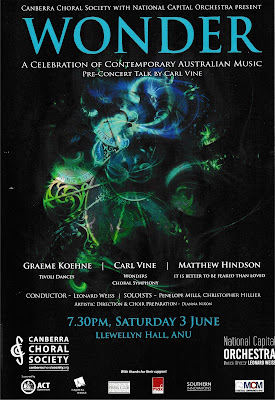 This celebration of contemporary Australian music was spectacular and hugely enjoyable.  It included works by Graeme Koehne, Carl Vine and Matthew Hindson and the distinctive styles of each composer gave us an evening of rich and varied music.

The program commenced with Graeme Koehne’s ‘Tivoli Dances’, first heard as the music for Sydney Dance Company’s ballet, ‘Tivoli’ in 2001.  The four movements mix popular and classical music styles to great and unexpected effect and the orchestra played it very well, especially the dramatic opening movement ‘Santa Anna Freeway’ and the love theme of the second movement.

Carl Vine’s Choral Symphony uses as a text, ‘Anuma Elish’, a creation myth from northern Babylonia from the period 1300 to 1250 BC and ‘Homeric Hymns’ to the Sun, the Earth and the Moon.  The dead languages evoke a sense of ritual and mysticism relevant to the subject of the work – the creation of the universe and man’s relationship to the deities of the cosmos.  The result is a haunting and atmospheric work that was beautifully played by the orchestra and sung with great clarity by the choir.

Matthew Hindson’s ‘It Is Better To Be Feared Than Loved’ uses Macchiavelli’s 500 year old text for its relevance to contemporary politics to provide the lyrics.  A playful work, it was clear that the choir was having a good time singing it.  The accompanying music was quite fascinating with individual instruments dominant at unexpected moments.  The balance between the voices and the orchestra was excellent.

The final work presented, Carl Vine’s ‘Wonders’, is based on Walt Whitman’s 1855 poem of the same name.  It describes the uplifting beauty and wonder the poet finds in everyday things.  This is a very moving work that builds to a stunning crescendo but finishes quietly and very satisfyingly.  Soloists Penelope Mills and Christopher Hillier sang superbly and the choir and orchestra accompanied them in a fine performance.