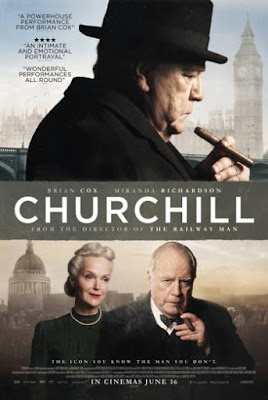 The title doesn’t give much away. Just that it’s about the wartime leader, the lion of Britain during the winter of World War II. We can be reasonably sure though that he won’t get the ‘great man’ treatment, and we expect to see what’s under the bowler hat and behind that set expression of grim determination. Someone all too mortal.

The tidy title also suggests bio pic but this Churchill, directed by expat-Aussie Jonathan Teplitsky, with veteran Scottish film and television actor Brian Cox in the lead role, covers just a few short days in the life. The lead up to the D-Day invasion that spearheaded the Allied push into Europe and eventually won the war in 1945.

A film from another key point in WWII, the early evacuation of troops, Dunkirk, is coming very soon. It is directed by action supremo and cine-stylist, Christopher Nolan.

The story of Winston Churchill, voted in 2002 the greatest Briton of all time, ought to be immensely interesting. Maybe even more so with a forthright Scot and an upstart Australian in key creative roles. The Indian director Shekhar Kapur and Australian actress Cate Blanchett did a striking version of Elizabeth, England’s iconic sixteenth century queen. And that worked, no question.

Churchill, scripted by a young British screenwriter and historian, Alex von Tunzelmann, has fairly predictably earned itself a bit of controversy. We have come to expect the knives to come out to excise factual errors, correct perspectives and maybe do worse damage, but the film seems to have come through fairly unscathed.

What struck me is how little we learn about Winston, really. We knew he liked his booze and tobacco, but the film wants us to believe that he was terribly haunted by the debacle of Gallipoli, that he was in charge of in WWI. It was a monumental disaster, but that can't have been all there was to his issues.

Even a casual reading of his life hints at all sorts of other demons. Neglected as a child, a poor student, questionable judgement during his political career. He suffered from depression and a deep-seated fear of failure. It’s well-known that Churchill was a handful for his darling wife Clemmie, and many others besides. The film could have given all this more coverage, rather than sheeting most of it back to Gallipoli.

Director Jonathan Teplitsky is a talented director with some outstanding work behind him—Better Than Sex, Getting’ Square and Burning Man. He also had substantial international success with Railway Man. It was sensitively made, if given a fairly conventional treatment, and with excellent performances. If only he could have been more flexible and light of foot here.

Apparently Teplitsky was brought on board later in project development. I have a hunch it may have had something to do with the sensitivity he has shown in his films for blokes with issues. Burning Man was about a young man behaving badly as his wife succumbs to terminal cancer, and Railway Man about a traumatised former soldier and prisoner-of-war.

Cox is an excellent Churchill and Miranda Richardson is terrific as his remarkable wife, but the film falls short for lack of insight. Sometimes it lags and feels as though the filmmakers didn’t have quite enough material to work with. The immensity of the subject was a bit daunting after all.

Posted by Canberra Critics Circle at 8:45 AM