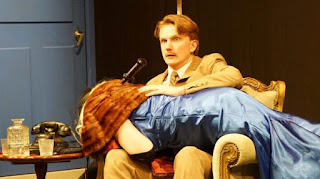 Dangling from the edge of a train as it passes over a bridge might be a tense situation for anyone to find themselves in, but sometimes glossed over is how much these threats to life and limb are also an assault on the dignity of a gentleman.

Patrick Barlow's  play "The 39 Steps" is a send-up of the Hitchcock film of the same name, with wrongly accused Richard Hannay (Patrick Galen-Mules) encountering bizarre situations in a picaresque campaign to clear his name, catch the spies, and woo the girl.

Starting life as a John Buchan thriller before being shaped by Hitchcock into a memorable film, this theatrical revision is a flamboyant parody of the genre, down to the dramatic "duh duh duh duh" every time someone utters that fateful, enigmatic MacGuffin - "The 39 steps!"

Jarred West was a strong choice to direct this kind of play, but compared to, for example, his manic treatment of Rep's production of Casanova, The 39 Steps is oddly restrained, if that can be said of a play where Helen McFarlane hops around playing more than a dozen different characters.

This may be because the decision here was for Patrick Galen-Mules to play the lead fairly straight, leaving him an oasis of calm in a universe that is completely indifferent to his needs for order or sanity.

In Hitchcock the humour always has a dark tinge, that even an innocent person can be the topic of an absurd cosmic joke - whether it is death by crop duster in North by Northwest, or the heroine of Psycho dying only a third into the movie.

So in the film of The 39 Steps, the political rally scene is still humorous (Hannay misreads the name of the candidate and dubs him "Mr. Crocodile" to jeers from the crowd), but it has an underlying tension - if Hannay fails here, he faces not just embarrassment, but certain and plausible death.

Here, the same scene is played entirely for laughs, with Hannay's desperate improvisations becoming more and more inspired, until the audience is on the verge of electing this dashing, passionate speaker to parliament.  Rather than a swimmer frantically trying not to sink, he is often a surfer riding effortlessly on whatever madness the story throws at him.

But playing Hannay fairly straight does work, because as Krusty the Clown says, "the pie gag's only funny when the sap's got dignity."  Being accused of murder is one thing, but between dealing with obnoxious underwear salesman, folding and unfolding an impossibly large map of Scotland, or the sexual possibilities inherent to the humble rustic stile - well, personally, I'd rather face the spies.

Much like Inspector Clouseau in the early Pink Panther films, the more Hannay fights to preserve  his dignity, the more it slips away.  Galen-Mules gives an impressive and polished performance, his main weakness a tendency to get quiet and weaken the potential energy of a scene.

As always, Steph Roberts is solid in her roles and generous with the other actors, but her primary character not as much fun because it is mainly there to disapprove of Hannay and then fall in love with him.  The stockings scene from the film is retained, with perfect absurdity, but not much sizzle.  Overall, I found the romance plot a bit unconvincing - their best moment was when they were screaming at each other.

Helen McFarlane almost steals the show just by playing more characters than there are in a standard production of a Shakespeare history play, and playing these broad parodies with a great deal of finesse and beautifully adroit physicality.  Nelson Blattman is also comfortable with his clowning, stronger here than he was in Wait Until Dark, his best moment when as vaudeville performer Mr. Memory he delivers an impressive, daunting-to-remember monologue.

The set was I thought a disappointment, however.  The idea that there would be doors that essentially led to other doors was good, but it felt basic and awkwardly flimsy rather than strikingly minimalist.  At points, the director makes a joke of creating a car out of simple objects, and it might have been better if this device was used consistently.  The parts of the play that were set among the audience were quite well done, however, with one heart-stopping leap of faith that perfectly uses the Theatre 3 space.

Despite some sags and lulls - parts could have been tightened during rehearsals, especially some tedious transitions - opening night was delightfully silly, and the show promises to firm up over its run.  West's interpretation is a madcap send-up of Hitchcock, not as outright zany as other productions, but driven by the choices of talented performers to create a vivid, hilarious night I will always remember for... the 39 characters played by Helen McFarlane! (duh duh duh duh)
Posted by Canberra Critics Circle at 10:31 PM