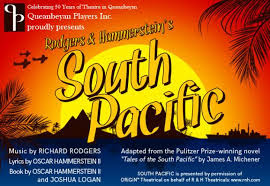 As the houselights dimmed and the first notes of the overture to “South Pacific” struck up, you could almost hear the sighs of happiness from the audience. It was easy to understand why. This is one of the most glorious scores that Rodgers and Hammerstein ever wrote, and it is well served by Jenna Hinton’s excellent orchestra.

Rodgers and Hammerstein’s musical, set on a South Pacific island during World War 11, still carries a punch with its frank exploration of race and miscegenation, not the least when the show’s likeable heroine, naval nurse Nellie Forbush, is appalled when she discovers that the French plantation owner, with whom she has fallen in love, is the father of mixed-race children. Then there is the brave Lieutenant Cable, who wastes no time deflowering the young island girl, Liat, pimped to him by her mother, Bloody Mary, then brutally dumps her, albeit with considerable anguish.

For her second production for Queanbeyan Players, her first being “My Fair Lady” in 2015, director Janet Tweedie has combined adventurous casting, an uncluttered attractive setting and good lighting design with imaginative use of stage spaces and inventive scene changes, to bring freshness to the staging of the storyline. However, awkward choreography for the production numbers, and a tendency for the cast to drop into straight lines, tends to reduce some of the effectiveness.

Michael Moore brings charm, authority and an appropriate sense of Gallic melancholy to the plantation owner, Emile de Becque. His singing of “Some Enchanted Evening” and “This Nearly Was Mine” provide the vocal highlights of the evening. Ellen Scott is a delightfully engaging Nellie and Anthony Simeonovic impresses as the stitched-up Lieutenant Cable finding the right mix of venom and confusion in “Carefully Taught”. Andrew McMillan offers a fine comic performance as Seabee Luther Billis, while Joseph McGrail-Bateup brings the necessary gravitas and humanity to the role of Capt. George Bracket.

Cast against type, Tina Robinson manages some laughs as the devious Bloody Mary, but lacks presence when deprived of lines, and her ill-advised jazz inflections in “Bali Hai” and “Happy Talk” reduces the dramatic potential of both songs.

But the real attraction of “South Pacific” is its glorious score. Don’t let the frosty Canberra nights put you off this opportunity to hear it beautifully performed by an enthusiastic cast and superb orchestra in Queanbeyan Players latest production.