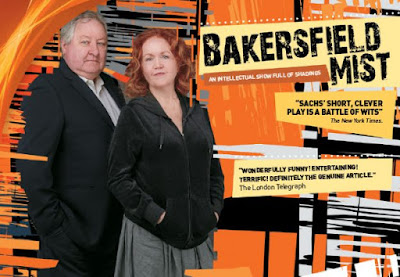 ‘No-one would fake a Jackson Pollock.  Why would anyone else paint shit like that?’

Maude is a down on her luck trailer park resident in Bakersfield, California who has found a painting in a pile of junk that just might be an original Jackson Pollock.  When renowned art expert, Lionel, visits to check the authenticity of the painting, their very different worlds and personalities clash strongly.

Both performers present very detailed and realistic characters.  John Wood is impressively pompous as the art expert who is sad and vulnerable under the surface.  Julie Nihill is wonderfully alive and abrasive as the bitter woman beaten up by life and stuck in a trailer park.

Writer, Stephen Sachs, explores the differences between people from contrasting worlds as well as showing how an obsession can impact negatively on a person’s life.  He also points out the difficulties involved in the art world where greed and forgery go hand in hand with idealism and beauty.  It’s a good play but the script does wander into subplots that seem redundant, especially towards the end.

The set designed by Jill Munro is impressive in its detail and direction by Lucy Freeman is tight and moves at a good pace.

This is a play that covers very interesting issues about life and art and the performances of the two cast members make it a very entertaining night in the theatre.

Len Power’s reviews are also broadcast on Artsound FM 92.7’s ‘Artcetera’ program (9am Saturdays) and other selected programs on Artsound.
Posted by Canberra Critics Circle at 10:25 AM