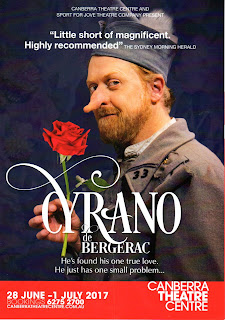 Incroyable!  Who would have thought you could turn a sentimental 19th Century Ugly Duckling story about a bloke with a big nose and an amazing turn of words into a significant highly relevant play.  And design the setting, sound and lights with a style of acting that is brilliantly sophisticated, humorous and ultimately sad, even tragic.

Instead of La salle de l’Hotel de Bourgogne, en 1640 we find ourselves at the same Hotel in Paris but It is late in 1913.  Fortunately perhaps, I had never seen a production of Cyrano de Bergerac nor read the script, so I had no concerns about the translation in time, nor about Ryan’s adaptation not just into English but including references in the sound track as well as in Cyrano’s witty remarks to events and technical devices from well into the future from 1913. But how did it all seem to hang together so well?

Neither the characters nor the plot as written by Edmond Rostand are in any sense realistic or believable.  If we were to play them straight, the sentimentality of Roxane realising as Cyrano is dying “La voix dans la nuit, c’était vous!” and finally exclaiming “Vous m’aimiez!” as he ‘read’ Christian’s last letter without having to read it – since he, Cyrano, actually wrote it – would be laughable rather than truly sad.

The trick which Damien Ryan has pulled off is to take on the character of Cyrano – literally in this revival of Sport for Jove’s 2013 production, since Yalin Ozucelik was no longer available to play the role – and imagine how he, the cynical, satirical wit Cyrano, would have staged and performed the whole play.  The first half (1 hour 20 mins) is continuously laughable because of the deliberately exaggerated way each character is performed, from the poor man with his pocket-thieving son through all the lower, middle and military classes to Roxane in the theatre box-seat, and including the actors in the play within this play, even unto Ryan playing Cyrano himself.

Weirdly, then, in contrast, the battle scene with Roxane’s improbable arrival as the Gascon soldiers are about to be sacrificed to win the war, through to Christian’s death, edges us towards a sense of the reality of senseless warfare.

Then we are taken just far enough back into humour again for the nunnery, into Roxane’s 14 years’ mourning for Christian, at enough distance emotionally to watch Cyrano’s death and Roxanne’s realisation that it was he who had written Christian’s love letters with a new recognition that this is just a play – a statement in the end about the nature of discrimination against those who look ‘different’ and the fact that the victims internalise the feeling of guilt for being different.  So Cyrano believes himself to be ‘ugly’ and therefore unlovable.

It is at this point that we see the story of Cyrano de Bergerac as a tragedy, representing as he does all the people who others see as ‘different’.  Damien Ryan’s approach has made the play relevant, by revealing a purpose – a social commentary – beyond, I think, Rostand’s intention.  Rather than experiencing mere emotional identification with Roxane and Cyrano, in a sentimental ending, we are set back a pace or two to understand the message.  If you want to be academic, you might say Ryan has successfully created a Brechtian ‘alienation effect’.

And good on him for doing so, for it made a great piece of modern theatre.