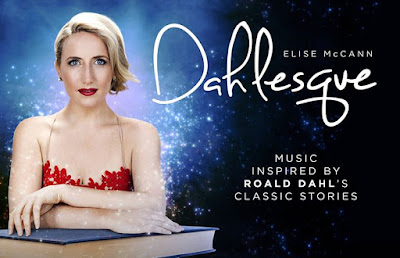 Elise McCann won Helpmann and Sydney Theatre Awards for her portrayal of Miss Honey in the Australian production of the Royal Shakespeare Company’s adaptation of Roald Dahl’s “Matilda”. “Matilda” is currently playing in the Festival Theatre in Adelaide, but with Lucy Maunder playing Miss Honey.

Apparently still smitten with the Roald Dahl bug, McCann has collaborated with Richard Carroll, Stephen Amos and Michael Tyack to devise this witty, stylish tribute to Dahl, in which she gives a performance which is pure star-quality from beginning to end.

Every inch the diva in elegant white slacks and top, with a detachable white overskirt monogrammed in black with Dahlisms which serves as a handy prop, McGann took command of the stage from her first entrance, immediately involving her audience in her brilliantly conceived exploration of the quirky world of Roald Dahl.

Drawing on songs from a variety of sources including  “Matilda”, “Willy Wonka”,  “Charlie and the Chocolate Factory” and “James and the Giant Peach”, as well as some delightful original compositions by Stephen Amos for Dahl’s “Revolting Rhymes”, McCann held her audience entranced with her impeccable diction, both in word and song, and perfectly honed stagecraft.

She introduced them to Dahl’s curious invented words, performed some samples of his writing, and then proceeded with revelations of the events and experiences, some quite moving, which made up his fascinating world. Throughout the telling she sprinkled in songs like Bricusse and Newley’s “Pure Imagination” and “Oompa, Loompa”, Shaiman and Wittman’s “It Must be Believed to be Seen”, and Tim Minchin’s “Naughty”, “The Smell of Rebellion” and “My House”, at perfectly judged moments.
A classy nine-piece orchestra, conducted from the piano by Michael Tyack, did full justice to Stephen Amos’ superb musical settings, and director, Richard Carroll added his own special magic with imaginative lighting, star cloths and stationery mirror balls.

“Dahlesque” is a magically conceived and presented show with special moments for every member of the family.  It will be touring so make sure you don’t miss it when it comes to your city.