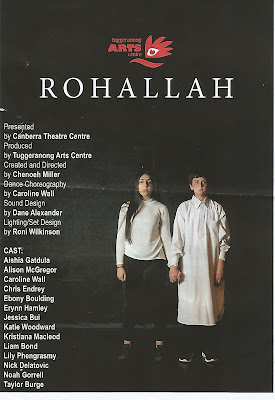 Created and directed by Chenoeh Miller

Presented by the Canberra Theatre Centre

The story of a young Afganistani refugee, Rohallah, who was rescued by a Perth couple and brought to Australia, where  he was educated, and who now works as an Uber driver in Canberra  while completing his University studies, provided the inspiration for this multi-discipline work combining elements of hip-hop and Butoh.

Rohallah himself was introduced prior to the performance, and charmed the audience by quietly relating his extraordinary journey to Canberra.Without a hint of malice or blame, he spoke matter-of-factly about his childhood and his life as a shepherd, and how he was persecuted and forced to flee warring factions who killed members of his family.

He told how he met an Australian couple, Margaret and John, who befriended him, sponsored him to Australia, fed, clothed and educated him. It was an affecting entre into the performance his experiences had inspired.

Performed by members of Fresh Funk and Little Dove Theatre, “Rohallah” is an abstract interpretation of the major events in Rohallah’s story. It begins with the cast filing slowly onto the stage in half-light, as Rohallah’s pre-recorded voice outlines the main events of his story. The lights come up to reveal a mother sobbing over the body of her dead child. A girl in a red dress gyrates frantically around her while a line of serious-faced performers advance over her towards the audience. One by one these performers break away and run around the auditorium, suggesting children at play.

Similar such episodes continue throughout the forty minute performance. Some are striking, others puzzling, their intention not always obvious, with each member of the audience left  to decide their individual interpretations. Costuming is patchy with the inclusion of sequined evening dresses and glitter eye-makeup questionable in the context. Two performers stand out from the ensemble, Noah Gorrell as the young Rohallah, and Nick Delatovic as the adult Rohallah.

Although neither of the forms of hip hop or butoh would seem obvious choices of expression for narrative storytelling, Chenoeh Miller and Caroline Wall have embraced both disciplines to create a unique and thought-provoking response to the plight of refugees.


This review first published in the digital edition of CITY NEWS on 23 June 2017
Posted by Canberra Critics Circle at 3:45 PM