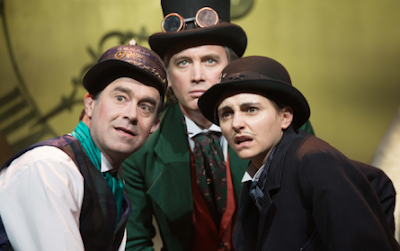 This production of Around the World in 80 Days attempts to adapt Verne's classic novel as a whirlwind farce, with only three actors playing every character in the story.

However the show fails almost uniformly, tripped up by a ho-hum script, weak performances, and a racism that can probably be attributed to sheer laziness rather than actual malice.

It is damning with faint praise to say that the steampunk-influenced set was quite nice.

The story follows Verne's fairly closely, with punctilious Englishman Phineas Fogg (Ian Stenlake) betting an exorbitant sum that he can circumnavigate the world in 80 days - such is his faith in both the sway of the British Empire and the power of technology.

Fogg's wager is soaked in irony - this is the British Empire just before the fall, and the  technological wonders that make his trip possible will be adapted in two world wars to a production-line of massacres.

Fogg himself is a parody of an Englishman, the kind of man who can travel the entire world and somehow not see or learn a single thing, completely blinded by faith in the superiority of his Englishness.

However the play is oblivious to the historical context of the material it is presenting, dabbing the era with a soft steam-punk feel that goes no further than the set and the costumes.

The comedy in the show is vintage, with the freshest joke stolen directly from Raiders of the Lost Ark - that is, from 1981.  In one scene the joke is that a character rapidly changes hats as they pretend to be two people, and this sequence was actually a highlight.

Some of the more dorky humour threatened to be entertaining - the way the actors would rock back and forth in subtly different ways to suggest riding on difference kinds of transport was occasionally charming.

The thin script was not helped by weak performances.  Wayne Scott Kermond grimaced through his multiple roles, and sometimes lapsed into a sotto voice that sucked energy from the show.

Ian Stenlake was stronger as the straight-backed Fogg, but was inconsistent on whether his character was a ridiculous pedant or a romantic hero.  The play glossed over Verne's own satire of Fogg's character - in the book, Fogg is so ridiculously proper that when we first meet him he has just dismissed his valet for providing shaving water a few degrees too cold.

Most of the charm of the show came from Sharon Millerchip in drag as Fogg's manservant, and her comic timing and good energy were the highlight of an otherwise plodding show.

But the worst of the show was a casual racism that was as tiresome as it was shocking.  Following Verne's original, of course the dashing Englishman Fogg discovers a heathen cult of Kali-worshippers performing the barbaric practice of sati -  good thing Fogg is there to save the day.

That propaganda for Empire would be bad enough.  But what really killed this sequence were accents that made Apu from The Simpsons look like a model for the sensitive depiction of Indian culture.

The travel across the Indian continent was so long and painful that there was a quiet horror in what this creative team would unleash when Fogg and company actually reached Hong Kong and Japan.  The mercy was that these sequences were short on native accents to mangle, and the play at least excised a sequence where in America the group must battle Native Americans.

The most generous view of this show would be to see it as a satire of Verne, in particular the plodding narration that has an engineer's adoration of dusty details.  It could be a satire of Englishness, or of blind faith in progress and salvation through technology.  But it is not any of these things - it tries to do for Verne's brand of science fiction what The 39 Steps did for thrillers, and fails completely.

This production of Around the World in 80 Days promises to soar like a hot air balloon, but never even leaves the ground.
Posted by Canberra Critics Circle at 8:27 PM