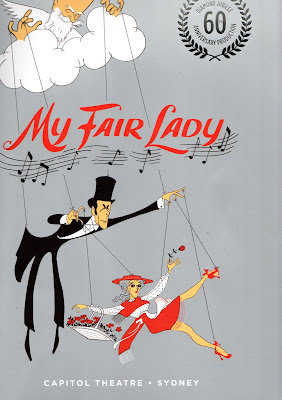 Credit, of course, first goes to George Bernard Shaw for refusing to allow his 1914 play Pygmalion to be turned into a ‘light opera’. As Shaw told Austro-Hungarian composer Franz Lehar, “A Pygmalion operetta is quite out of the question … Pygmalion is my most steady source of income: it saved me from ruin during the war, and still brings in a substantial penny every week.” Having been burned before, Shaw swore he’d never “allow a comic opera to supplant it.”  [ 15 Loverly Facts About My Fair Lady by Mark Mancini at http://mentalfloss.com/article/76684/15-loverly-facts-about-my-fair-lady ]  The burning referred to Oscar Strauss’s 1908 too popular operetta The Chocolate Soldier adapted from Shaw’s 1894 play Arms and the Man.

Second, you have to admire Alan Jay Lerner for finding the right musician, Frederick Loewe, and both of them for not being afraid of Shaw’s dialogue-based in-depth characterisation, and for writing lyrics and music that strengthened especially Eliza, Professor Higgins and Alfred P Doolittle.

Anna O’Byrne, Charles Edwards and Reg Livermore were supernovas among all the other stars, including a wonderful Mrs Higgins from Robyn Nevin.  For some audiences, opera is more about sumptuous sets, costumes and singing than thoroughly good acting.  The standing ovation at Wednesday’s largely seniors matinee happened because it all came together: busloads of oldies were as excited as perhaps we (I’m one of them) are rather less often than we used to be, as the beautiful star-filled ceiling of the old Capitol Theatre faded before the stars on stage.

And indeed the sets on that grand revolve were stunning, like the costumes, make-up and props – while the orchestra under Guy Simpson played all the ‘highs and lows’ just right.  Christopher Gatelli’s choreography ranged from tremendous athleticism to the wonderfully ironic statue-like imagery of the Ascot horse race, accompanied by 3-dimensional sound.  Julie Andrews’ directing never missed a beat both in the musical and acting sense.

I could have danced all night, except that I wasn’t on a bus.  I was driving, stuck near the airport, as reported by Keely McDonough, The Daily Telegraph, August 30, 2017 7:06 pm: ... Traffic remains very sluggish on the M5 East in Sydney’s south west after an earlier crash [at 4.30pm just after the My Fair Lady matinee finished] involving a car, a truck and a motorcycle...caused a monster traffic jam with all westbound lanes blocked and traffic backed up for 10km.

So, after thinking about why I prefer not to live in Sydney, I had time to wonder about the ending of My Fair Lady.  I’ve reviewed productions of Pygmalion three times in the past twenty years, and never had doubts about Eliza’s future at the end of the play.

MRS HIGGINS.  The carriage is waiting, Eliza.  Are you ready?
LIZA.  Quite.  Is the Professor coming?
MRS HIGGINS.  Certainly not.  He cant behave himself in church.  He makes remarks out loud all the time on the clergyman’s pronunciation.
LIZA.  Then I shall not see you again,  Professor.  Goodbye.

Does she mean what she says? Higgins orders “by the way, Eliza, order a ham and a Stilton cheese, will you?” and “a pair of reindeer gloves number eights” and a tie.  “You can choose the colour.”

Shaw’s stage instruction is [His cheerful, careless, vigorous voice shews that he is incorrigible].

LIZA. [disdainfully] bluntly tells Higgins “Number eights are too small for you....You have three new ties....Colonel Pickering prefers double Gloucester to Stilton; and you don’t notice the difference.  I telephoned Mrs Pearce this morning not to forget the ham.  What you are to do without me I cannot imagine.  [She sweeps out].

So why, in My Fair Lady, does Eliza reappear, standing quietly watching until Higgins turns and realises she is there?  This is definitely not Shaw’s ending.

I think there must have been considerable discussion for this Australian Opera production because Charles Edwards played the Higgins character exactly, maybe even more forcefully true to Shaw’s characterisation of this impossibly insensitive self-centred man.

Just before the lights dimmed on that final image, Edwards turned his face away, towards the audience, and put his head down – to do what?  Hide Higgins' embarrassment, when he had never been embarrassed before?  Hide his tears, as he realised he has lost her forever?  As a kind of joke, pretending to be a little boy?

According to one of the many things written about the making of My Fair Lady, Rogers and Hammerstein gave up on the project when asked by Gabriel Pascal (with whom Shaw had collaborated for the 1938 Pygmalion film), because there was no obvious love interest.  I suspect Lerner and Loewe were pressured to have Eliza come back to Higgins to satisfy that sentimental demand – the exact opposite of Shaw’s view of such a relationship, as he explains in great and often humorous detail in a postscript following the text of the film version (published by Penguin in 1941):

“Eliza has no use for the foolish romantic tradition that all women love to be mastered, if not actually bullied and beaten....  No doubt there are slavish women as well as slavish men; and women, like men, [who] admire those that are stronger than themselves.  But to admire a strong person and to live under that strong person’s thumb are two different things....”

Though Higgins has said, when Eliza says “Yes, you turn round and make up to me now that I’m not afraid of you, and can do without you”, that “I like you like this...now youre a tower of strength: a consort battleship”, we must recognise Shaw’s perceptiveness.  This Higgins is the example of the despot Shaw quotes in the postscript: ‘When you go to women,’ says Nietzsche ‘take your whip with you.’

Considering Anna O’Byrne’s terrific feisty Eliza and Charles Edward’s completely intransigent Higgins, his head down at the end can mean no more than her reappearing will make his life hell if she stays.  Just read the rest of the postscript to Pygmalion, and you’ll see what I mean.

But dont (that’s Shaw’s spelling) refuse to see My Fair Lady on the grounds of some feminist principles.  Opera Australia have got it right as near as right can be.