If I describe the household of father Arnold, mother Paige, elder son Isaac and younger trans sibling Max as dystopian, it would be true but would miss the point.  A golden veil of tinsel strips swept aside to reveal a lounge-room/kitchen in complete disarray.  The characters’ accents were absolutely definite: this is America.

As I watched a very funny but telling first act I had the weird feeling I was seeing a David Pope cartoon in action.  So often his picture (usually of the day’s Australian political news) is funny, yet always with a sense of foreboding.  If we were to see the image play out, surely funny would turn into disaster.  This is what happens in HIR.

Then I found the Pope cartoon to match: 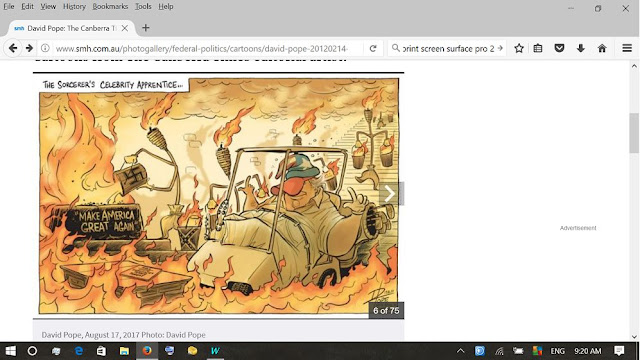 This is the America who elected Donald Trump, whose Whitehouse daily falls apart as each new appointment takes off in their own direction, trying to escape impending disaster.

Paige’s home is in a poverty-stricken suburb built on a garbage dump.  There is no employment for Isaac, who has joined the Marines seeking some surety of existence and now arrives home after years of collecting dismembered body parts, having been discharged for drug use, to find his mother no longer cleans the house on principle as a feminist.  His once family-violent father is demented after a stroke brought on, his mother claims, because after the last time her husband raped her, she stood up to him and took control.

His young ‘sister’ is now in the process of transitioning with hormones to becoming male, looking forward to surgery to increase the size of hir clitoris, and insisting on the correct pronouns to be used.  Hir mother actively supports the change.  She has sold the house to raise funds and support her venture organising a non-profit to return the suburb to its original natural condition.

Isaac attempts to put everything back in ‘order’ in military fashion, and the result is an explosion of emotional conflict.

All this can be presented with cartoon-style humour, in the same way that Jewish people satirise their foibles, or Aboriginal people create blak comedy, because the writer, Taylor Mac “started plotting my escape” from Stockton, California, which “held the honour of having the highest murder rate (per capita) in America…the second I developed a feminine walk and became conscious that I wasn’t like the other boys.”  Max – played by transgender actor Kurt Pimblett – in this play seeks to “survive and find community”, while it is important to acknowledge the valuable role in this production played by Associate Artist Lucky Price who “was identified female at birth  and at the age of 34 transitioned his gender in 2014 to male.”

But – as I imagined about David Pope’s cartoon – when the funny stuff gets to an extreme stage (as I think it will for Donald Trump), the explosion in HIR is a horribly tragic end.  Though Taylor Mac can write about hirself “We continually talk about how lucky we are that our queerness and our need to survive and find community gave us the extra bit of drive that was needed to get out of those homophobic and transphobic environments”, the end of his play leaves all four characters with literally nowhere to go, not only within the family where any remnants of personal relationships have been destroyed, but with no economic support in Donald Trump’s Great Again America.

At that moment of realisation, as the final blackout was about to happen, there was a great silence in the audience.

I would have much preferred that depth of silence to have been held for much longer before bringing lights up and the cast on for curtain call, which induced the usual claps, cheers and whistles in the audience.  The quality of the writing, performances and design in this production certainly justified that highly positive response, but I needed more time to absorb and cope with the tragedy of our times which this excellent play exposes.


Posted by Canberra Critics Circle at 11:33 AM