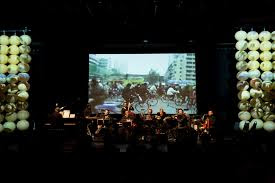 Composer Erik Griswold has had a long association with Sichuan. Together with percussionist, Vanessa Tomlinson, he has visited the province many times to study Sichuan percussion, folk music and street songs. Water Pushes Sand is his attempt to distil their feelings of discovery, confusion and wonder into a single musical experience, incorporating eastern and western instruments, songs, film and Chinese performance skills.

The performance was introduced by the sounds of two cymbalists who focussed attention before a raucous parade of musicians, led by a chanting Chinese tenor, entered the room in a cacophony of sound. The musicians settled themselves onstage where, conducting from the piano, the composer guided them through a series of musical impressions, some of which were accompanied by filmed sequences, and over-dubbed with traffic noises and water effects. A section commenting on urban renewal and the destruction of Wide Alley was performed to a spoken narration.

The music itself ranged intriguingly through tightly scored sections of aggressive dissonance, cool jazz infused brass sections, shimmering Chinese zither, minimalist piano variations and mind-bendingly complex percussion sequences. At one point cymbals were thrown across the stage, creating a moment which vied with the ear-splitting duel between saxophonists Tim O’Dwyer and Scott McConnachie, who challenged each other with virtuosic improvisations, for the most memorable section of the work.

It was a shame that space limitation on the small stage, which was attractively decorated on either side with Chinese lanterns, hampered the staging. The orchestra appeared uncomfortably cramped, and the low stage ceiling, together with the placement of the bass player centre-stage, severely compromised the effectiveness of the filmed sequences. As well in the final sequence, the gorgeously costumed, Sheng Li Zheng, who had throughout provided a series of impressive vocal interpolations, was forced to perform his amazing face-changing routine at floor-level, resulting in a restricted view for many in the audience.

These quibbles apart, Water Pushes Sand proved to be a challenging and satisfying experience, and a fascinating insight into the Australian Art Orchestra’s quest to explore the jazz of tomorrow.