UNDER THE COVERS - Matthew Mitcham 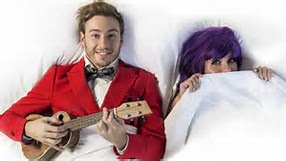 For Matthew Mitcham his ticket to fame was his physical prowess. Following a sporting career as a medal-winning junior trampolinist, he turned to diving. He reached the zenith of his sporting career, and won world-wide attention, when he won a gold medal at the 2008 Olympics, for a dive which gained the highest single dive score in Olympic history.

He continued to compete but was never able to quite top that achievement, and as his career began to falter, resorted to methamphetamine, and became addicted. Admirably, he overcame the addiction, announced his retirement from competitive sport, and, looking for new fields to conquer, set his sights on a career in show-biz.

Already he’s achieved success. He’s become a television ‘personality’, appearing in shows like “Dancing with the Stars”, and “Celebrity Splash”. He’s published a tell-all autobiography, “Twists and Turns”, which he mined as the basis of his first cabaret.

In his second cabaret, “Under the Covers”, Mitcham revisits some of these events. With disarming candidness, he asks the question “If not a diver, what am I here for ?”, while  looking back over his shoulder to reflect on how he dealt with the opportunities and issues, he’s faced since retiring from competitive diving, including his struggles with substance abuse,  depression, self-doubt, and self-expression.

In this well-constructed, cleverly scripted and constantly absorbing show, Mitcham is accompanied by Matthew Ogle on piano, and the irrepressible Spanky, (aka Rhys Morgan) who acts as  a sort of gay conscience, interacting with Mitcham as he tells his story and joining him in the  smartly choreographed song and dance routines which pepper the show.

But it is when Mitcham is alone on the stage, with just his ukulele, and his unique and fascinating story, that the show is at its most affecting. Mitcham has come a long way in developing his performance skills.  He has an appealingly amiable style of storytelling, boyishly savouring his achievements, but at the same time, not shying away from the embarrassing bits.

His voice is serviceable, he’s a pretty groovy mover, and he plays a mean ukulele, perhaps a tad too often. He hasn’t yet mastered the art of making his songs part of his conversation. That will come when he discards the ukulele, chooses songs which more closely reflect his message, and finesses his performance even further. Mitcham is a perfectionist, so expect that to happen.

In its present form, “Under the Covers” offers a diverting, sometimes surprising, hour of entertainment. It has the potential to be much more than that, for as Mitcham says at one point, “If you can’t be a good example, be a horrible warning”.

Already “Under the Covers” is an excellent example at how effectively cabaret can deliver a strong and important story. Catch it when it comes to your city.