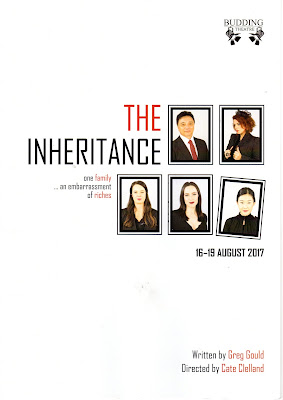 Greg Gould has written a conventional morality play in a unusual style.

The story might seem a little reminiscent of Shakespeare’s King Lear, but is centred on the roles of the women in the family of a dominating man.  Gina is clearly Cordelia, Emily perhaps Goneril, Amanda would be Regan, the lawyer John is the sensible Kent, while Paul is Oswald the fop.  Les Essington, like Lear, has to learn the value of his youngest daughter’s integrity.  Dianna has no parallel in Shakespeare’s play, of course, since Lear’s wife is never even mentioned.

Gould’s story is less grand.  Les is a self-made wheeler and dealer, a billionaire in his robust sixties, who competed with Alan Bond to try for the America’s Cup, but who surprisingly dies while having sex with his young mistress (not a bimbo, but a biochemist).  Only a few months prior, he had made his lawyer redraft his will – apparently leaving Gina nothing.  But there is a twist: Gina accepts his decision, and his only gift – a ragged looking doll which he had refused to let her keep when she was a young child.

The set, an office to one side and a bathroom-toilet on the other, doesn’t change but the action takes place mainly in the lawyer’s office at the gathering of the widow and daughters for the reading of the will, or in the bathroom with Dianna refusing to come out of the toilet, interspersed with flashback scenes between Gina and her father.  In the final brief scene, we see Les reappear and drink a scotch with his lawyer – perhaps a flashback to when they met to change the will; or suggesting that Les is not actually dead (so the reading of the will is a ploy to bring his recalcitrant family together); or suggesting it is Les’ ghost celebrating in John’s imagination.

The writing of the dialogue is well done, capturing the different characters of the three daughters, the manic behaviour of their mother, and the good nature of the lawyer.  In the first scene with the youngsters, the playing is quite naturalistic (and the three young performers are very good), but after that I couldn’t be sure whether the exaggerated style in the acting was intended by the author; or whether Cate Clelland was using exaggeration as a device to make the script work.

On reflection I think it was the latter.  The script, if played straight, would become a melodrama, a typical moralistic tale.  Played this way, Paul’s character would be no more than a cardboard cutout of a servant.  But Vivek Sharma makes him into a highly over-the-top caricature of a gay man, almost to the point of a politically incorrect stereotype.  He does it very well, and gets plenty of laughs to balance the internecine verbal warfare between the three sisters and their mother.  The style of all four women, especially in Jess Waterhouse’s Emily, is exaggerated, not to the same degree but still enough to contrast with the very natural style used for John, who finally has to stand on his digs and bring the battles to a standstill so that the will can be read in something like the proper manner.

Going at it in this way meant, I think, that the issues – such as the rights and lack of power of women, and the acceptance or not of the right to be wealthy – became clarified.  If the style had been kept naturalistic all round, the play would seem to be no more than a very ordinary sentimental and unbelievable story.

This doesn’t mean that I can say it’s a great play.  It falls too much between the stools of satirical comedy and straight social commentary.  I think the model that Greg Gould could work towards is the tv show, The Family Law, where the comedy and social criticism sit more comfortably together.  Clelland has written in her Director’s Note of these characters that “Their immense wealth makes them larger than life and highly theatrical”, achieved very well by all the adult women performers, “but their problems make them believably human”.  Though the actors under Clelland’s direction achieved some moments where we could emotionally identify with those characters, the script will need more development to shift us more easily from one stool to another.

Clelland notes that she “would like to thank Greg for deciding to finish this play and for trusting us with taking it for its first run”, and I can certainly support her in this.


Posted by Canberra Critics Circle at 9:21 AM