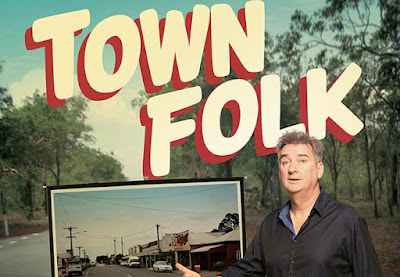 ‘Town Folk’ is a wickedly funny and clever concept.  Based on surveys sent out to the community prior to the performance, the ‘Town Folk’ team identify subjects for the show and, in the week prior to the performance, capture local identities and well-known locations on camera as well.  The result gives us the opportunity to look at our everyday lives in a way we can’t see ourselves.  It’s gently satirical and very amusing.

Devised and performed by comedian Damian Callinan, the show made Queanbeyan much more interesting than we Canberrans would ever have thought possible.  Even for native Queanbeyanners!

Starting with a slide show, local monuments and locations became somewhat less boring with a bit of wacky photoshopping.  Nichole Overall’s ‘Mysterious Queanbeyan By Moonlight’ tour was delightfully ruined by Damian in a clever film by his skilful cinematographer and editor, John Cherry.  Then, in another very funny film sequence, Damian proved that the locals will go out of their way to help strangers, even at appalling cost to themselves.

The audience was also given the opportunity to compare and vote on the best and worst of both Queanbeyan and Palerang Council’s landmarks in Braidwood and Bungendore and, trying to be helpful, Damian gave the audience a chance to come up with a better Queanbeyan town slogan, none of which should ever be heard of in the future.

On film again, Damian offered his rather unhelpful coaching expertise to the Queanbeyan Tigers football group and he demonstrated that the Queanbeyan Macedonian Dance Group could get along very well without him.  The show finished with ‘Quizbeyan’ in which two locals competed on stage to answer loaded questions about local history and geography.

Damian Callinan is a very funny and clever performer with a pleasing down to earth personality.  He might be working to a formula for this show but the material he presents is new and untested in each location where he performs.  He also has to get his audience warmed up and happy to interact with him very quickly.  It might look easy, but it takes a lot of skill to be able to do this successfully.  His show was hugely enjoyable.