Putting Words in Their Mouths Platform Paper No 52 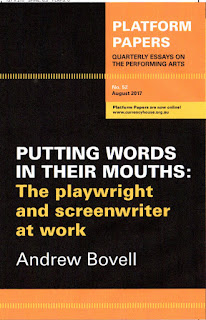 Putting Words in Their Mouths: The Playwright and Screenwriter at Work by Andrew Bovell.  Platform Paper No 52, Currency House, August 10, 2017.

Many of us in Canberra will remember with great sorrow, along with Andrew Bovell, as he writes about the murder in Thailand in 1988 of  “the inspirational theatre director Ewa Czajor.  She was on her way to study theatre in Warsaw and had stopped off for a brief holiday with her friend, the actor Peter Murphy.  In that moment our youth came to an end.  The first death among us was brutal and savage.  The world was no longer innocent.  Ewa left a gaping hole in the lives of many.”

I remember, too, a year or two earlier, a fresh sort of excitement when this new young playwright suddenly appeared out of the blue: “I had my first professional work produced in 1986, whilst I was still officially at college.  Roland Manderson, with whom I had studied at the VCA [Victorian College for the Arts], asked me to join the Ensemble Theatre Project in Canberra, to create a work about living in the national capital.  The result was An Ocean out My Window.  The title was ironic, given that Canberra was the only Australian capital without an ocean outside its window.  This project used the principles that we had practised at VCA – of building a work through improvisation and collaboration to support the writing process.  The play was well received by its audience and critics; and my first royalty cheque at the end was a significant symbolic moment.”

I have an image in my head of a figure waving his arms about (was he jumping about on his desk?) seeking some kind of escape out that window from Federal Capital bureaucracy. So I think it’s appropriate to show you Andrew Bovell as he is today, dressed successfully in the window of a cave, the sea going on forever behind his image.


The key to the value of Bovell’s story of his life, as a playwright and screenwriter for film and television, is his insistence on the importance of those enduring VCA principles for success and quality.  You might expect that he would be the central figure in his story, yet in every chapter he explains how essential other people have been in his process of “building a work through improvisation and collaboration”.

In contrasting the work of a novelist, poet or short story writer – whose words are primarily to be read – with his work as a playwright or screenwriter, he emphasises that his words are primarily “to be said and heard.  I rely on the work of the actor, the vision of the director and designers and the presence of the audience.  Without them, my work remains as just words on a page.”

Of course, these words could be no more than a conventional homily, a moral injunction.  But it is the sense of immediacy and sincerity we have all felt in watching plays like Speaking in Tongues, When the Rain Stops Falling, Holy Day, The Secret River and even in the very early After Dinner (1988), as well as in his most famous film Lantana, which shines clearly throughout each chapter.  In fact, he ties the whole story together with words he has put into the mouths of characters, beginning with


Though Gabriel is speaking about fish falling out of the sky in Alice Springs in the year 2039, Andrew explains how he finds himself thinking about his writing in the same way: I do not believe in miracles.  I cannot explain this.

Rather than becoming a set of instructions on how to Put Words in Their Mouths, his Paper is a series of revelations about his own experiences from his childhood in the Western Australian wheatbelt through to his present mature state.  He quotes the marginal woman Nora in Holy Day (2001):

Look at it!  Endless fucking plain.
Soon a thousand flowers will bloom.
It’s a bastard to trick us like that.  To
make us forget what easy death lies
out there.

Today he writes “Some writers burn quickly and brightly and produce an extraordinary body of work in a short time.  Others attain early success and then simply repeat themselves.  I want every piece I write to be different from those that preceded it.  Although, there will always be common themes and approaches to process, I want to venture in to new ground each time I write a play.  I’m in it for the long haul.  I still believe my best work is ahead of me.  I have to believe that.  But, in order to ensure that’s the case, I need to keep learning.”

Andrew Bovell takes us with him across that ‘endless fucking plain’ past the ‘death that lies out there’, thankful for the ‘thousand flowers that bloom’.  His learning experience becomes ours.  Though the words in a Platform Paper are primarily to be read, reading Putting Words in Their Mouths is like being on stage in a great improvisation, or being in a virtual-reality life-long movie with our best work still ahead of us.

Like the best theatre, he writes deceptively simply; like the best movie, he lets the story tell itself.  What is there not to like in this insightful Platform Paper 52, a credit to Currency House and, of course, to the author, Andew Bovell, himself.